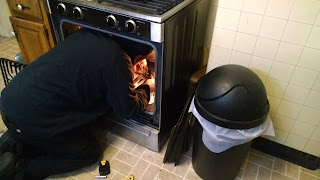 Another thing that happened besides the market madness is that the repairman showed up and finally fixed the Bosch stove. Above is a picture I snapped of the repairman doing the job, to the tune of $219. 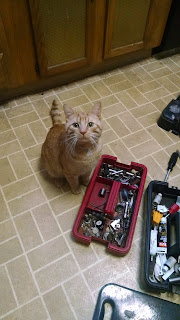 That was the caption Howard wrote on Facebook for the picture I took and it is most apt. We were talking about how nice it is that Jeoffry is sociable. So many cats run and hide and there is nothing wrong with that, but we like that ours comes out, says hello and sometimes even offers assistance.

In celebration for the stove being done I roasted some of the cauliflower I had bought at the market on my spending spree, plus I roasted and stuffed an eggplant. This morning I made peanut butter/ oatmeal bars for church coffee hour. The recipe is from an ancient Pillsbury Bake-Off competition. The booklet shows the winning entries being judged by Pennario's friend Greer Garson so I know the recipes are good.

Wow, look at this. Naively I go looking to see if I can find the recipe online and I cannot. This is what I found on the Pillsbury site .. a bunch of recipes built on convenience foods and prepackaged mixes. One of them even starts with "a roll of Pillsbury refrigerated chocolate chip cookies."

Clearly with Greer Garson gone this contest has hit the skids.

Oh well. Aside from that life feels right again with the oven working.

Now, if I could only stop baking!