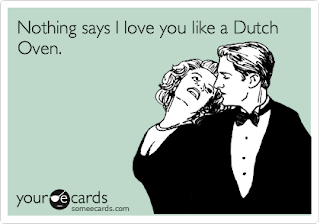 Because of my kaput oven I am discovering what the Dutch oven can do.

A Dutch oven is an oven, right? I started thinking about that the other day. Dutch meaning German in American parlance, it is a German oven. Well, I think they are pretty much used everywhere in the world. Everyone cooks in pots. You could go to Africa or Australia centuries ago and find people cooking in heavy pots, if not cast iron then earthenware. It is as old as humanity.

People did not always have electronic ovens telling you the temperature! And yet people have always baked breads and such.

So today I made a pot pie out of Eating Well, the new issue. They said put it in the oven. I said bosh. As in Bosch!

The pot pie has a biscuit crust and you can do that in the Dutch oven. Just put it on simmer, spoon the biscuit dough over the bubbling stew, put the lid on, turn it to low, and in 15 minutes, there you have it, yummy biscuits.

I hear you can also bake cookies on the stove top. I have been researching that.  As Leonard Pennario's biographer I have learned to be resourceful.

Next I want to bake a cake in the Dutch oven. I hear that is possible too.  Where there's a will there's a way!

I will report how it goes! It is funny, you know? The high-tech oven goes blooey.

But the Dutch oven lives on!