A Bill of Divorcement 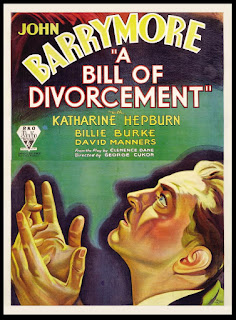 Today I went to the gym where I rode the elliptical machine and watched "A Bill of  Divorcement."

I knew next to little about "A Bill of Divorcement," and that is the way I like it. Yesterday I started watching this Joseph Cotten movie "Love Letters." It seemed interesting but first this guy from Turner Classic Movies got on and introduced it. And he told too much! I think there is this egghead attitude that knowing the plot shouldn't spoil it for you, you are above that, you can appreciate the artistry. But I do not want to know what is going to happen! I do not even want to know the first thing!

So that annoyed me, that this guy just told me too much. Plus I had just watched "Portrait of Jennie" on my last two trips to the gym. The gym has sure gotten interesting these days! But I think I was getting a little tired of dour Joseph Cotten. On the other hand, he was great friends with Leonard Pennario and I love him for that, plus let's admit it, Joseph Cotten is handsome as hell, so I was going to see "Love Letters" through. But for some reason today YouTube froze up on the video and would not let me continue watching it. In effect it gave the movie the hook for me. Hence, "A Bill of Divorcement."

I divorced myself from "Love Letters"!

"A Bill of Divorcement" was pretty good. It stars a very young Katherine Hepburn, or as Pennario called her, Katie Hepburn. She looks wonderful, with beautiful gowns that fit her perfectly. And John Barrymore is in it too. The music is by the great Max Steiner, who wrote the music for "Gone With the Wind." I got the feeling as it went on that the movie was based on a play. It just had that feeling. That is all I will say, just in case anyone else wants to watch it and does not want it spoiled.

If anyone watches it, let me know what you think.

I feel as I am in a movie club with myself!