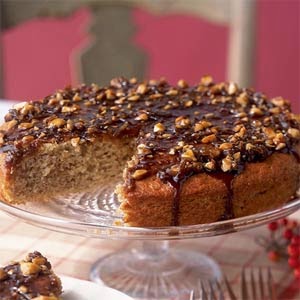 Going on about Sunday yesterday I forgot to mention a very important and exciting thing.

I made Banana Coffee Cake! And it was a big hit at the after-church coffee hour.

What makes baking so darned much fun? My father used to tell me that before he was married one of the things he used to do was bake on a Saturday afternoon while listening to the Metropolitan Opera. There is something so relaxing about that! I mean, you can bake and at the same time give a good amount of attention to the opera.

Saturday baking dovetails nicely with church on Sunday because then you have people to eat what you bake. I am trying to think of the things I have tried. Last week, when it was Epiphany time, I made a Mexican Three Kings bread. It was a yeast bread but I made it more Three Kings-like by adding a glaze and then sugar in the colors of the Three Kings, which as we discovered last year are purple, gold and green.

People at church were praising my Three Kings bread because the children loved it. And the grown-ups liked it, too. It is the kind of sweet bread that all ethnic groups know by some name or another. I heard an Italian woman passing a slice to another Italian woman and saying, "Panettone." Both of them looked pleased and I felt very complimented. As the biographer of Leonard Pennario I take pride in being able to cook Italian delicacies. Or delicacies that can pass for Italian!

But for now, the Banana Coffee Cake. The recipe I linked to called for macademia nuts but who has those. I used toasted walnuts. Yum.

Also I heeded the people who wrote comments and said to double the topping. I did that, yessirree. It is that Cooking Light syndrome when sometimes they skimp on things to save a couple of calories and you are up a creek. You learn to double certain things and question certain things.

I actually doubled the recipe and made two cakes because when it came to servings, eight was not enough. The only thing is was, I forgot in the heat of the moment to take a picture. Alack and alas and Alaska! So I used the picture from Cooking Light up above. It did look pretty much like that.

Anyway, as we learned previously, leave the food photography to the pros!