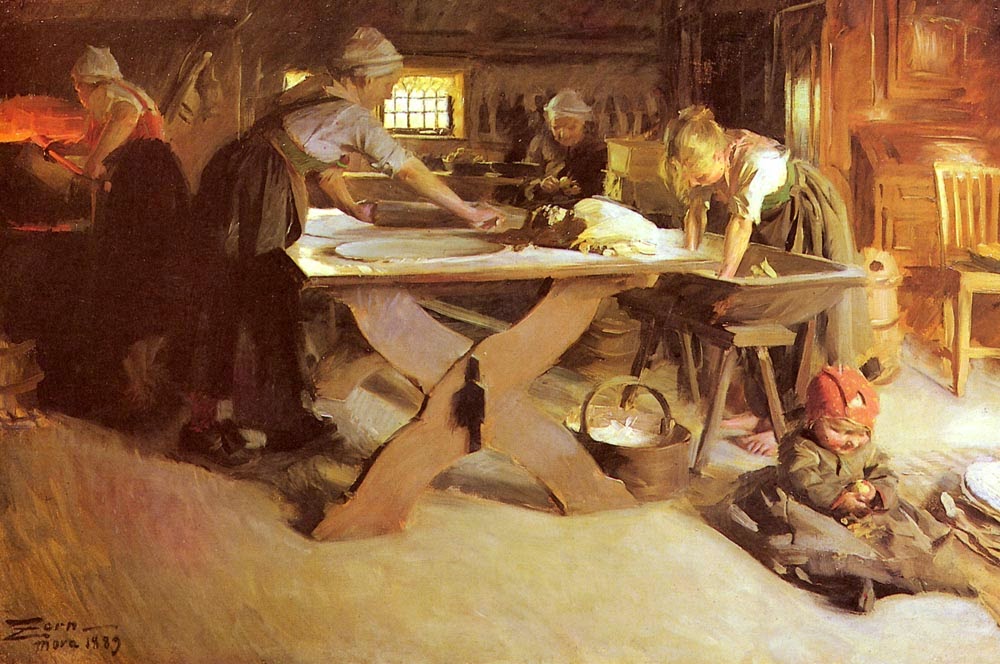 I love Saturdays! I have two bread machines going at once plus the Crock Pot! It is like having a kitchen full of servants as in the 1889 painting above by Anders Zorn.

Recently I acquired a new Welbilt. I picked it up at Goodwill where I had stopped to drop some things off, go figure. I could not help it. The Lord taketh away and the Lord giveth.

The new Welbilt is this deluxe Model 8200 that makes two-pound loaves! I sprang $11 for it, that is how intriguing it looked. The day I bought it, I did not think to mention it to Howard until after dinner. I don't know how that happened, that at dinner we had been discussing something other than the Welbilt. But anyway I told him about it later.

"Why didn't you tell me before?" he said.

Immediately everything else is shoved aside so he could explore the Welbilt and its capabilities and removable parts.

To welcome the Welbilt I had sprung another $2.50 for a vintage edition of Bernard Clayton's New Complete Book of Breads. I was sort of second-guessing myself because the book didn't have any pictures and seemed kind of dense. But Howard applauded my purchase.

"There might be something interesting in it," he said. And lo, reading the Amazon description, it does appear that it is much valued by bakers.

Long story short, the Welbilt is in action for the second time, this time making Egg Bread.

Next to it is a Breadman which is actually on loan from my brother George. It is making Jewish rye.

The only idle bread machine is the Magic Chef. Perhaps I should load it up with something! Meanwhile the kitchen is rocking. Well, the counter is rocking. These machines are no joke!

Now it is back to Pennario. I have to make good use of my Saturday.

Activity all over the house!
Posted by Mary Kunz Goldman on April 05, 2014

Hahaha... tasty is right. I like it too much sometimes! That's the only trouble with bread machines. It's hard to stop eating the bread!