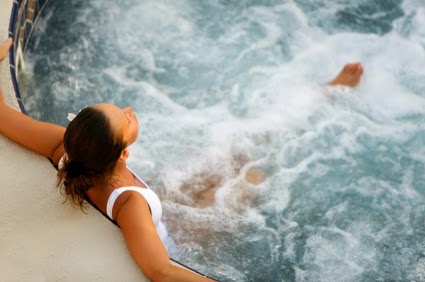 Remember the business about LA Fitness and its pool? I have gone in it several times now.

And I have gone into the Jacuzzi too.

Oh, right, the pool. I go in recreationally after doing the elliptical or whatever. I do not want to get my exercise in the pool. I only know recreational swimming strokes. My favorite is the sidestroke which I do lazily while gazing out at the blue sky outside. You really feel as if you are on vacation.

There are usually a couple of other people swimming, usually more seriously than I am. The Jacuzzi sees more traffic although this morning when I was in it -- it was kind of early, too -- there was nobody in it for quite a while. I sat there with my eyes closed and remembered when I was in California with Pennario, going into the hot tub. I would sit there with all these pink flowers and palm trees, feeling as if time had stopped. Time really did stop for a while there, when I was in California.

Today this Japanese woman eventually joined me in the Jacuzzi. But she didn't seem to speak much English which was fine because who the heck feels like talking.

"This is so relaxing," I said to her.

Then we both closed our eyes and sat there in quiet companionship.

After swimming you feel relaxed all the way up to going to bed at night. There is something too about that lingering aroma of chlorine.

A beautiful start to the day.
Posted by Mary Kunz Goldman on April 02, 2014