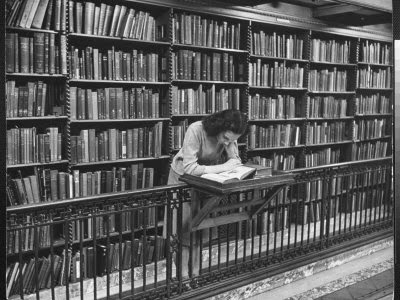 I should have mentioned, it was part of my, ahem, research for this story I got to write at work about President Grover Cleveland, who was for all intents and purposes from Buffalo. Meaning he was not born here but Buffalo made him who he was. He was our sheriff and mayor before becoming governor and then president. All this happened in the space of a few years.

I find old Grover a fascinating story to tell you the truth. As I wrote to someone on Facebook I really came to admire the big guy.

But it was not as if I were writing about Beethoven or Leonard Pennario or someone I knew well. I did all this scrambling trying to get to the truth about Cleveland. There is so much untruth flying around out there. And it is only getting worse with the Internet. You never know what to believe! Above is a photograph of me trying to sort it all out. Alfred Eisenstadt snapped me when I was not looking!


Yesterday on The News' site I see some jerk claiming that Cleveland killed two men "with his bare hands." Um, excuse me? When he was sheriff he had to hang two criminals personally because no one else could or would do it. It was a task he dreaded.

It is funny when you are researching someone intently for a couple of days, you get a feel for the person.

Here is one thing that happened: This speech was floating around the Internet that people were saying was the voice of Grover Cleveland. I was excited about that because I wanted to hear what Cleveland sounded like

But when I started listening to it something did not sound right.

"That is not what Cleveland would have sounded like," I thought to myself. The voice was too stentorian, too regal, even taking into account that we are talking about a century ago when people spoke more pompously. I kept trying to get my mind around that this was Grover Cleveland but I could not.

Sure enough, it ends up being a mistake! It was William Jennings Bryan giving his Cross of Gold speech.

You cannot fool me when it comes to these dead people.

I have had too much practice!