Wow, adventures in driving! Today I got stuck before it was even 9 a.m.

Foolishly I had driven out thinking I would go downtown to Mass at St. Anthony's. Even more foolishly I told the organist, Josephine, when she called that I could pick her up. First I had to shovel this drift in front of my garage to get out and then I realized that the side street where my friend Josephine lives had not been plowed. Holy St. Anthony's cannoli, I was stuck!

In the middle of the street!

I was blocking the street but luckily at 8:30 a.m. nobody was around except for a few people with snowblowers. One man, he was like some kind of saint, he helped unstick me. This was after I had gone and gotten one of Josephine's snow shovels and failed to dig myself out.

You got to love Buffalo. Other people appeared on the scene and helped too and I was free, at least momentarily. Howard, wisely as it turned out, insisted that I come home. So I did. Between there and getting home I got stuck one more time, just for good measure. The same good people dug me out. I will never figure out exactly which people were helping me so I think what I will do is, I will go to Josephine's street, Norwalk Avenue, and leave a bag of cookies or something in everyone's mailbox. I owe them big!

So does Josephine. When I left, the snowblower guy was telling her he would drive her to church. "But you don't understand," Josephine was saying. "It's downtown by City Hall."

Darn, I wanted to go too! We were having a church party I had been looking forward to. But on the other hand I just wanted to get this behemoth of a car home. I could not leave it in the street or get it into anyone's driveway. Also I admit it, I was just stressed out. First the other night and now this! Anyway, I left Josephine with this snowblower gentleman and as far as I know, they went together to St. Anthony's. I went home.

I took a nap because I had been up really early thanks to Leonard Pennario. Then I went to Mass at St. Mark's. I am lucky in that there is a church I can walk to in about two minutes.

This was another beautiful Buffalo experience, as it turned out. I was walking to church mostly in the street, because the snow was so heavy and piled everywhere. And other people were also walking in the street. When I got to the corner there were other people heading over from other directions, in ones, twos and threes. And I realized everyone was going the same place I was! Everyone was going to church!

It felt like a village in the 19th century! 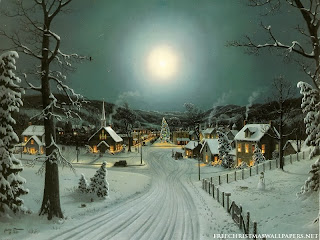 The Mass was not what I am used to, and sure I miss my Gregorian chants, but it was gentle and sincere, it was so sweet, this snowy day, this church packed with people. Everyone into it, too -- men, women, kids, everyone. A very nice morning, after its dramatic start. A very nice day.

And I think I will ride the bus.