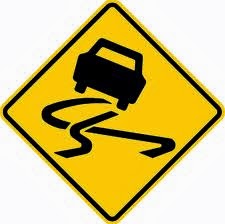 Howard and I celebrated our ninth (!) anniversary today.

Yesterday it took us forever to figure out if it was eight years or nine years. Neither of us had been keeping track! But it ends up it is nine years.

The dinner followed an eventful day that culminated in my two-hour drive home from work in a snowstorm. That was a trip. I will say that. It looked for a while as if I were in a car wash!

You couldn't see and every couple of feet the police were making us detour. I kept being directed away from the direction I was supposed to be going in. The best was when I got to the Delaware Avenue "S" curves. The traffic had been inching along for a mile and all of a sudden you saw he reason: Everyone was being detoured down Rumsey Road.

I never saw that detour coming and when I finally saw it my heart sank. There was another half an hour, easily. Rumsey Road runs through Delaware Park and there was this single file line of cars and this forest of snow. It was like this big whiteout. I was driving through it thinking, "I don't know where I am." Thinking, "I do not blame Leonard Pennario for preferring California to this."

He did his job today! I did get home in one piece to celebrate my wedding anniversary. With the Love Boat.