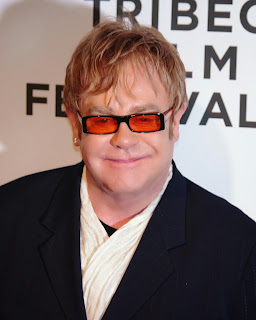 Don't you hate it when you have a song on your brain ... and you don't know the words?

This is a problem with Zumba class because there are these Zumba numbers running through your head and a lot of the time, even in class hearing the thing, you can't catch most of the words. So you have just a shard of it stuck in your mind.

"The following is not a test, DEEJAY!"

On the other end of the spectrum this sort of problem also occurs with classical songs or opera arias. One day I hope to learn all the words to Mozart's "Non So Piu ..."

from "The Marriage of Figaro," but I do not know much Italian and after the first line or so I am stuck.

Anyway, this morning I wake up, I am loading up the coffee percolator, and for some reason there is one song in me and it has to come out and it is Elton John's "Goodbye Yellow Brick Road."

I think the reason it was on my mind was the other night when I had to Tweet about the Emmy Awards, I was hoping old Elton, in his Liberace tribute, would at least come up with a good song. He does not have the piano chops but at least you expect a good song. Which we did not get. And this was my subconscious dealing with the situation, going, "Well, Elton John has written some songs I like."

The trouble is, I have heard them a million times but I don't know the words. I guess I have never listened that carefully. So this is me singing "Goodbye Yellow Brick Road":

That was when I almost submerged the percolator in dishwater. I always almost forget that you cannot!

Notice that I spelled plough the British way. It is because Elton John is British! Speaking of the plough, I always like him for that reference to the Roman statesman Cincinnatus. Lucius Quinctius Cincinnatus owned a farm and wanted to go back to his plow, and he did, but when Rome needed his service again, he answered the call. In Latin class you always learn the story of Cincinnatus and his plow.

You have to wonder, you know, if you stopped a kid on the street in Cincinnati and asked him or her who the city was named after, if the kid would be able to tell you.

Oh well. All this rumination and I am still stuck with my original problem.

Got to nip this in the bud otherwise this will be a long day. Administer Brahms immediately!