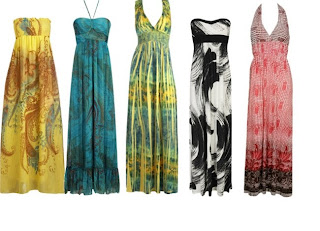 I have been wanting to buy into this maxi-dress fad and last night I bought the most wonderful dresses.

Notice I said "last night." Not "yesterday." It was at night! My friend Tracy and I were going for a walk. We were walking down Allen Street and all of a sudden I saw this beautiful dress in the window.

"Look, Tracy!" I said. "Look at this beautiful dress!"

All of a sudden this guy appeared from out of the shop. We had thought the shop was closed, but no, it was not, and here was this guy beckoning us in. Tracy and I were transfixed. We were mesmerized. We entered the shop.

It was like going to heaven. I mean, all it would have needed was Leonard Pennario on piano and you would have thought you had died and this was the afterlife. There were these beautiful dresses everywhere. And as if from a great distance I heard this man saying, "Fifteen dollars ... 20 dollars..."

Plus, they were prettier than any of those dresses pictured up above. Way prettier.

End result, as we say here in Buffalo, I ended up taking two dresses into the, ahem, fitting room. Which was hilarious. This great bohemian Buffalo fitting room, with an antique mirror leaning against a wall, and a door that was painted over and clearly had not been opened in a century.

I emerged from the store with three maxi-dresses. One of them I wore to a party later that night, a birthday party for my friend Gary.

There is another dress that, I said to Howard, "This is my favorite dress I have ever had in my life."

It was amazing. Red and pink roses on a filmy fabric that, oh, it's amazing. You will just have to see it.