St. Anthony's is all atwitter because the friars are coming back. Above is a picture of one of them, heading back to Buffalo!

Remember religious bingo? I think a friar would have to count for something in that game.

I do not know if I mentioned the friars last time they were here. They make you feel as if you are back in the year 1150, or thereabouts. I took this picture from the organ loft. One friar says Mass and the others are in the pews. See them, all in a row, in their gray robes? 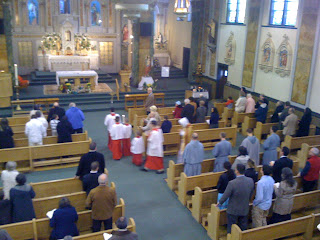 I see from my picture info that it was April 11. That is neat, how your picture file gives you the date and time you took the picture! It was April 11, 9:05 a.m.

The first time I saw the celebrant walking in, hood over his head ... see fuzzy picture ... 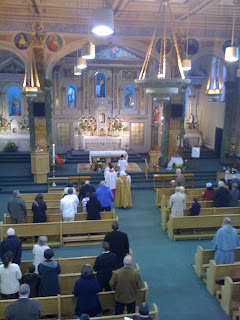 ... I was enchanted. That first time there was one friar there by himself. The next time he showed up he brought his friends. Before Mass people were watching wide-eyed as the doors of this little car opened and all these friars, one after another, came piling out.

Then there was the sermon. The friar began it by saying, "In the name of the Father, and the Son and the Holy Spirit. Praise be to Jesus and Mary forever." Then he stood there for a moment and looked at us. No "I hope everyone's enjoying this beautiful day." No "Thanks for coming to Mass." This must be what is called a deep friar. Har!

The friars are from the Binghamton area. I am envious. What makes Binghamton so great that they can luck out and get these guys? How can Buffalo steal them? We produced air-conditioning and the Barcalounger and the Pierce Arrow and Leonard Pennario. You would think we would have these friars.

Well, at least we can borrow them. The friars will be here the last two Sundays in July, I believe. I will have to find out for sure.