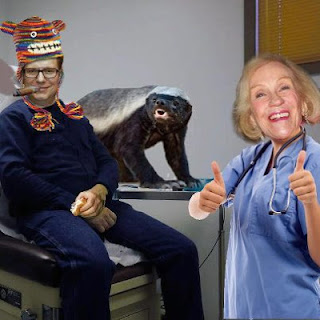 The final version of Howard at the doctor, pursuant to yesterday's post. Observe the cigar in his mouth, and our friend Doris Jones flaunting a stethoscope.

We are not sure what his headdress is but I think someone wrote something about him taking it off the head of the medicine man.

I keep being afraid my nose is going to start feeling funny in sympathy with Howard. He is worried that will happen too. We mirror each other sometimes in strange ways. Sometimes it is opposite! A couple of years ago -- yikes, now that I think about it, I think it was before Leonard Pennario -- I was on the South Beach Diet. The diet is really strict for the first two weeks and during that time, while I sweated it out, Howard began eating voraciously. It could not be helped! I had to give up alcohol, too. That was another thing. And so Howard began to drink. He got a Manhattan when we went to Jocko and I forget what else.

He did not do it to be mean! It was as if he could not help it. Even at the time I was laughing about it.

Some psychologist could probably explain this. Meanwhile ...

He cannot laugh or sneeze!