Last night I did not watch or listen to the presidential debate. I sat it out!

Obama and Romney debated without me!

I half expected a call from one of them asking where I was. "Mary, we can't start without you."

But what happened was, a couple of weeks ago, I went for about five days without sleeping. I could not sleep for love or money and finally Howard came up with a reason why.

"You listen to too much talk radio," he said.

As proof he produced this picture of me. 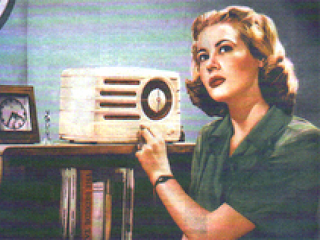 I thought about what he had said. It was true! While I was making dinner at night I would listen to the news. I was also listening to Sean Hannity. I love Sean Hannity. I love how he sounds like this Irish roustabout down at the pub. But he is delivering all this upsetting stuff and it is not good to hear that right before you are supposed to be going to sleep.

So I turned off the radio.

The next morning I got up all bright-eyed and bushy-tailed and in my car I turned off the news and I listened to Leonard Pennario instead.

It really is like eliminating caffeine or something. Since I made these changes I have had no problem sleeping.

So, last night, the debates. If they were in the morning I might have allowed myself to listen in. But the time was too late at night and you know what, who cares what I think anyway, I am not in a swing state. I had a feeling the whole thing would get me all aggravated and for what.

This morning there was the paper on my doorstep so I could catch up on what I missed. Plus there is always YouTube and clips on the Internet everywhere.

I am happier and healthier!