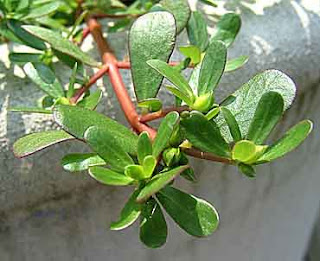 Remember the bishop's weed that I have been eating? Since writing that laudatory post I have gone on to make pesto with it. But that is a whole other story.

Now there is a new weed, one that also began growing in my garden. It is funny, when I was observing all the seedlings coming up that I planted, there was one set of seedlings that I was nurturing and later I realized it was, you guessed it, a weed. I realized that when it began growing in the driveway as well as in the garden, as well as over at Howard's building.

But this is a most excellent weed.

And today I see that purslane is featured in Martha Stewart!

It is in their WTF column. Which stands for What's That Food, haha.

That little column is really complimentary to purslane. Purslane is the Leonard Pennario of the weed world, brilliant and versatile. Purslane is also healthy. It is high in omega-3 fatty acids, to use a phrase I love.

Just that word, purslane, I love it. It sounds so Olde English. Let me look it up.


What do you know?

A most distinguished weed!


I will report back on what I do with it.