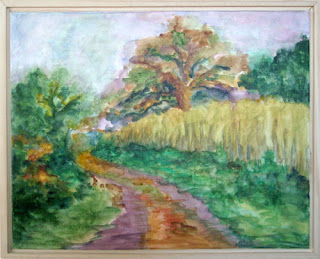 Yesterday I went out walking in the park after going out electronics shopping. Electronics shopping, looking for my new voice recorder I mean, was as bad as I feared it would be. Slugs and oiks, everywhere and unhelpful!

It is the first day I was able to do that.

While I was somewhere around step 8,000 the pedometer app did something funny and without warning it kicked into music. There is a way it hooks up with the iPod and I must have hit some button by mistake because it did that.

There were all these fragments of piano music, as if a deejay were wildly flipping through stuff I had in my iPod library. Then it settled on Pennario playing "Carnaval," by Schumann.

Which was nice! But then it was funny, after that it kind of skipped around. It must have set itself on Shuffle. Shuffle is something I never do but when I tried to fix it, I couldn't. So I just listened.

It played Pennario playing the theme from "Kings Row."

Then it selected, in its wisdom, the "Credo" from the Mass of the Angels. I had forgotten I had uploaded that way back when, when I was learning to sing that in church.

After that there was silence and then I was surprised to hear my own voice. I was reading out loud the words that Leopold Stokowski wrote to Leonard Pennario, about how moving he thought Pennario's performance was of Rachmaninoff's "Rhapsody on a Theme of Paganini."

They had just performed the piece together. Stokowski writes that it was so moving, it reminded him of Rachmaninoff's own performance.

Sometimes I read things into a recording so I can type it out, take dictation from myself. I figured that was what I was doing.

But then I heard Leonard's voice.

And I realized it was a recording I had made in California. We were talking about this letter and then we talked about these other letters and pictures he had.

What was that doing in my iPod? The system must have grabbed it up somehow. Computers have a way of doing things without you knowing. When I was first in California I had a digital recorder and that was how I had made this recording, before it broke.

I couldn't get over how much laughing there was. I hardly ever listen to any of my old tapes. I transcribed them all and I always thought it would be kind of too emotional to listen to them. But now I just walked and listened, fascinated, with the sun going down on what I guess was the longest day of the year. He sounded older than I remembered. I think I tend to remember him as younger because I am writing about him mostly when he was younger. But I could not get over how much he joked around. How funny he was.

It cheered me up, after the slugs and oiks.