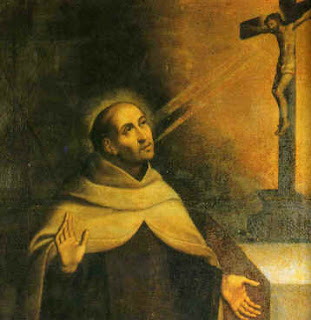 Today I had an unusual Sunday because I went to see the first Mass of a priest who was just ordained yesterday. He is the godson of my friend Josephine who is the organist at St. Anthony's, the church I go to.

The priest is Father Andrew Lauricella and his first Mass was at St. Margaret's. That is a painting of him up above! OK, I could not find a picture of him and so I used St. John of the Cross.

I have never seen the first Mass of a brand-new priest! It was kind of exciting. At Communion time, I have to be honest, I got tears in my eyes. Just watching Father Lauricella distributing Communion, you could feel his joy. You could see it. It was really moving.

The Mass was of course in English, and you know me and English masses. But I got through it. Just a few things bugged me. One was that this old guy, a monsignor or someone, just had to take a jab at the Tridentine Mass. He was saying "a few words" after Communion, you know how that goes, and he said, "When I became a priest my first Mass was in Latin."

And I sit there dreamily imagining how beautiful that must have been. There is a beautiful high altar at St. Margaret's and I could not help imagining a Tridentine Mass there.

But then this monsignor, or whatever he was, he said: "It was almost as incomprehensible as the new translation."

He means the new Liturgy translation. Where, instead of saying "And also with you," you say, "And with your spirit." And they made other changes that made things more musical and dignified.

This guy had to say something, you know? When any time I have gone to a non-Tridentine Mass, people seem enthusiastic about these changes. They say, "And with your spirit" with gusto.

Why try to poison them against it?

Another thing, why have these reminiscences at this point in the Mass? Isn't that what receptions are for?

It's funny, I read the story yesterday in The Buffalo News about three priests, of whom Father Lauricella is one, being ordained. Right away you read that the ceremony "featured laughter." What is with all this laughter? What happened to, ahem, solemnity? At this Mass this morning I got the sense people expect it. The sermon has to be funny. Everything has to be funny. You know me, I am not a frowning person. Neither was the great Catholic writer Hilaire Belloc who, even though he was sort of frowning here... 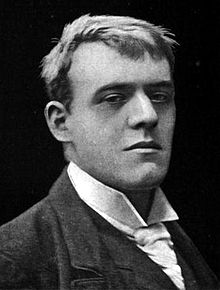 ... was very accurate when he wrote the immortal poem:

But to everything there is a time, and there is also a beauty, you could say even a delight, in something thrilling and powerful and serious. We have really lost that in the Catholic Church, I mean to the extent that people like that old priest at church today actually ridicule what is sacred.

Then they take a survey and wonder why nobody believes in the Resurrection.

It was neat to see St. Margaret's because although I believe I have been in it before, I did not remember it, so maybe I was not ever in it, who knows. They have beautiful windows.

A few weeks ago I got to do a story on a former music director at St. Margaret's, John Surra. He was a bandleader who taught hundreds of kids in Buffalo. Like "The Music Man," only of course he was not a con man like Harold Hill. That was a story I loved writing. And I thought of him today at St. Margaret's.

Another person who crossed my mind was, you guessed it, Leonard Pennario. He paid at least one visit to St. Margaret's. He went to a baptism there when he was standing godfather. Pennario flew in from his concert tour to do that, to go to Hertel Avenue for this baptism.

He was the greatest!

I was hoping you'd be at St. Anthony's today. We had Confirmation done by Bishop Grosz. It was beyond beautiful!!! Those young people were quite fortunate.. it was all so much more dignified and meaningful than the Confirmation Mass that I had in the 90s.

The Confirmation Mass I went to a couple of weeks ago, when I was my niece's sponsor, that was unbelievable with all the laughing and chit-chat. Interesting times we live in, Bing! Pax tecum!