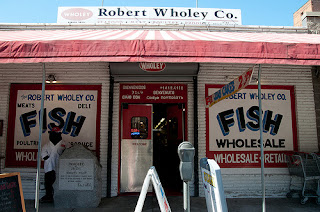 I had the best time today in Tops!

They have this frozen fish half price this week. It has a great brand name, Wholey. I had never heard of it before! Now Googling around I find there is a Wholey Fish store in Pittsburgh. It seems to be rather famous. Well, in any case: on Wednesday I was going to my mom's and had to pick her up something for dinner. And there it was: Wholey! But not wholly priced. Halfly priced.

A pound of salmon was $4.99 and tilapia was $3.99 and shrimp was in between at $4.49. Wow, not only am I a walking Gusto these days, I am a walking Tops ad! And the thing is, the fish comes in plastic pouches, with sauce inside. You boil the pouches in water and then voila.

Normally I am not one for prepared food but comes a time.

So. I got Salmon with Bernaise Sauce and asparagus which, listen to me, is on sale at Tops for $1.99 a pound. And russet potatoes, five pound bags, buy one get one free. This is hilarious, here I was today trying to remember which concerto it was that Pennario played at London's Royal Festival Hall with the conductor Anatole Fistoulari, and I was drawing a blank.

I thought: I cannot think of this concerto, I am losing it.

However, just ask me the price of russet potatoes at Tops!

Well, Pennario liked his good eats so I am not that ashamed. Anyway, on I go over there with this salmon. It was tremendous! My mom loved it and I did too. We ate up every bit! These are Buffalonian-sized portions. No pious four-ounce fillets. Eight ounces, baby. This is terrible but I have to say, I pretty much blew Ash Wednesday. I remember sitting at work, at my desk, at 10 a.m. and realizing I had already eaten my entire allotment of food for the day. I was like some kind of big dog! 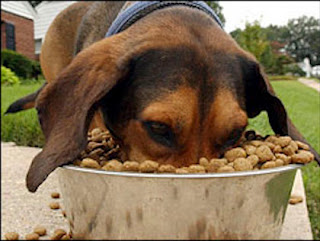 There was no stopping me.

Anyway, so today before going to my mom's I went back to Tops. I wanted to get more of this fish. I must have looked eager because an attendant came over and she was all smiling and was directing me to where they had more choices. This is the Tops on Harlem where the Jubilee used to be. They must be nice there because all the workers seem happy.

So I told the attendant all about how my mom had loved this salmon. Meanwhile this being Buffalo other customers begin interestedly heading over, and they join in the conversation, and soon we are all loading up on this fish.

"My boyfriend will love this," this other woman said, selecting a coconut shrimp package.

After selecting my fish I went through the do-it-yourself checkout line in Tops. I am getting better and better at that. But that is a whole other story.

For now, I am thinking I might buy more of that fish. It is on sale through Saturday!

And when I go back I am armed with a nice prepared joke to go with the prepared fish. I am going to have to ask with a straight face if they have mackerel.

Because then it would be Wholey Mackerel!

I bet that joke is big in Pittsburgh.
Posted by Mary Kunz Goldman on February 23, 2012