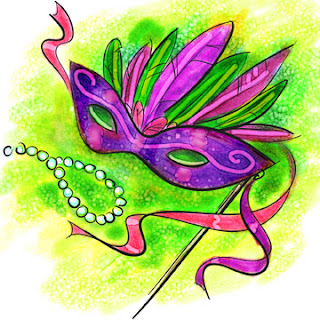 Howard and I celebrated Mardi Gras in kind of low key style. But elegant!

I made a fish gumbo and I had a glass of wine and Howard had peppy cider which he loves. And we listened to this cool record set I bought at one of the estate sales I went to with my mom last summer. It is a three-record set from Book of the Month club where you get to hear three lyricists singing their own songs. The first record is Johnny Mercer and then there is Alan Jay Lerner and finally Sammy Cahn.

Howard could not get over this record set! It is amazing the stuff I walk into the house with as a matter of course that he never sees. And, I mean, they are just sitting there. I do not hide them or anything.

The records were recorded in 1971 at the New York 92nd Street Y. I cannot wait to hear Sammy Cahn but for now all we had time for were the first two. I liked how Alan Jay Lerner, in between his numbers, talked shop. I will go over this record again and share more of his secrets. But for now, there was one song which, he realized it was a strong melody but it needed words all of one syllable. Another song -- this was "I Talk To The Trees"...

... from "Paint Your Wagon," he sweated over writing that song for days before realizing that what it needed was not to rhyme.

He also talked about how some songs are "realization" songs. The hero or heroine comes to a realization. In "Gigi" it is when the hero, whoever he is (I forget), realizes that Gigi has grown up before his very eyes. In "Camelot," King Arthur has his epiphany when he realizes that Camelot will live on in legend. After revealing that, Alan Jay Lerner sang this song.

These are useful things to know in life.

The Johnny Mercer record featured Margaret Whiting who was a friend of Leonard Pennario's. But I liked how Lerner talked shop.

So that was my fun for today! Now tomorrow is Ash Wednesday. Lent descends.

Zut alors and son of a gumbo-gobbling sea cook!