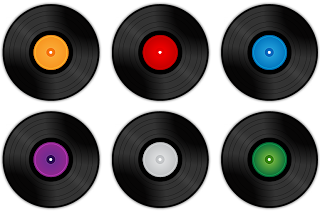 What with all the other exciting things going on I forgot to say how I celebrated Black Friday. TGIBF! That is what Howard wrote on Facebook that day.

I spent $20 for 40 records. Something like that. The records at Goodwill are 50 cents each.

It is a funny thing about records. My record player and records make me feel so hip. One thing is, my nieces were over on Thanksgiving. One of them is 15 and the other is I think 11. They are the prettiest and most stylish little girls in the world but all they care about at my house is the record player.

They have organized all my records and they go and select a few of them and they want to play them. Then I have to coach them through getting the temperamental record player going. It is a challenge sometimes but that is part of the fun. And the thing always does work.

This is my cute Sputnik record player we are talking about, that I bought memorably in the far reaches of Tonawanda -- remember, when I walked in and the stereo was playing Pennario's Chopin waltzes.

I used to keep the stereo in the front room ... 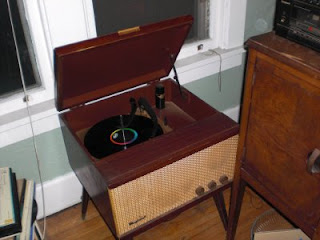 ... but now it is in a new location in the living room where we can all get at it better.

The nieces went and found a stack of Christmas records. They chose one of the Firestone records, with Julie Andrew. And the classic Sinatra Christmas album. And the Vince Guaraldi Charlie Brown Christmas.

After that I got to appreciating my record player all over again and later on, as I was doing the dishes, I played Placido Domingo's '80s era Christmas album. One side is really good, with "O Holy Night" and "I'll Be Home For Christmas." My dad used to say about Lauritz Melchior singing show tunes, "He sounded as if he could eat the song." That is what Placido Domingo sounds like in "I'll Be Home For Christmas." These Wagnerian tenors! I am telling you.

Now we are all on a vinyl kick. My mother made me move her record player so she could get at it better. We put it on a table by the window.

My friend Michelle came over and we drank wine and listened to Carmen Dragon's great Capitol Records Christmas album.

Then we opened another bottle and listened to the Roger Wagner Chorale.

I know I am jumping the gun on Christmas music by the whole of Advent but sometimes that cannot be helped.

Now Michelle wants a record player. We are going to look around and find her a dandy one. Except Howard says it will be difficult because no matter which one we find we will want to keep it. Plus I will have to find her extra copies of the Carmen Dragon and Roger Wagner Chorale Christmas albums.

It is catching!
Posted by Mary Kunz Goldman on November 28, 2011