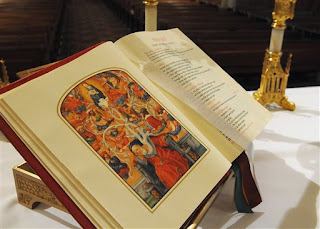 Today is the first Sunday of Advent which means it is the day the Catholic Church switched over to its new translation of the English language Mass that is closer to the Latin. I went to the Tridentine Mass I usually go to, so it did not directly impact me. But I have to say, I am hooked on the drama!

I was reading stories about the switch. The best is this woman in Milwaukee quoted in the Associated Press story -- naturally they found someone like her -- saying, "I'm not going to learn the damn prayers."

Can you believe that??

Just now because it is late I finally got around to looking the new translation over.

I like how after you receive Communion you say, "Lord, I am not worthy that you should enter under my roof, but say but the word and my soul shall be healed." That is what the Roman centurion said to Christ, the centurion whose servant was dying. An even bigger thrill is to say it in Latin, the language the centurion would have used. But I will not go there.

Naturally I love "and with your spirit" instead of that vanilla "And also with you."

And this is cool. In the Gloria, they restored that line that goes, "We give You thanks for Your great glory." I wrote right here on this Web log that I loved that line and it was too bad it was gone. Now it is back! Does that show the clout I wield with the Vatican or what?

Wow, reading that post, I cannot believe it. I had no discipline at all, frittering away my whole morning! I am much more disciplined now. That Leonard Pennario book is coming along nicely now, thank you very much.

Anyway, back to the new translation. I like those poetic lines. I remember them from when I was very little, when the Mass was in English but it was in a more formal translation.

Reading through the new translation, though, I am disappointed that so much is unchanged.

There are also all these options. You use this version of a prayer OR that version OR another version. Why all these options? One thing I like about the Mass I go to, the Mass in Latin, it just goes. No choices to make. It is like a train, you get on it and it rolls along the tracks. I like that.

Small as the change is, though, it is great it is getting all this ink.

Even though the writers in general seem to have a dim grasp of Roman Catholicism.

Even though the comment section invariably descends pretty quickly into: "What about the pedophilia? Are they going to stop that?" and "I got away from the Catholic Church years ago blah blah blah."

These people, they think they are being all original, you know? You just want to shake them.

That woman in Milwaukee, at least she was original.

Mary, your comments on the new translation had me laughing so hard!! Can you believe how stubborn some people are?? DAMN!