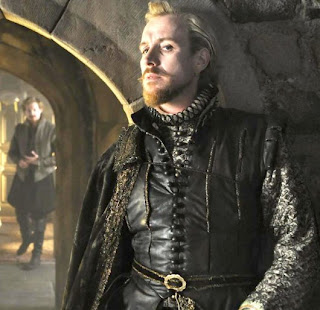 Last night I went with my mom to the Steer and to see "Anonymous." My friend Lizzie joined us for the show. "Anonymous" is the movie based on the premise that Shakespeare did not write the Shakespeare plays, that Shakespeare was a poor loser and the plays were in fact written by a nobleman, the Earl of Oxford.

I love that premise!

Everyone was telling me how excellent the movie was. My friend Michelle saw it last weekend. She said, "When it is over you are totally convinced that the Earl of Oxford wrote Shakespeare's plays."

That is the truth! I mean that is how you feel.

Plus, she informed me, "The Earl of Oxford is hot." That is the Earl up above.

Or perhaps she means Young Earl of Oxford, here dancing with Queen Elizabeth.

The movie, which seems to be some kind of British/German collaboration, is wonderful to watch just for its scenes of Elizabethan London. That is why we went to the Steer, you know? Before seeing a movie like this you must go to a tavern with a Shakespearean name.

There is a scene I loved when the great poet Ben Jonson finally tells off the Earl of Oxford's wife, who hates that her husband spends all this time writing.

"Madame," he says, "we, our civilization and even our Queen will be remembered only because we lived in the age when he put ink to paper." It was something like that. See the movie.

The elitist in me loves the idea that only a nobleman could have written Shakespeare's plays. It is funny but it is kind of the same premise behind "Amadeus." How could an ordinary guy have come up with such sublime creations? And Mozart and Shakespeare sit together at the pinnacle of Western civilization's achievements. The two are often likened to each other. Mozart had a book of Shakespeare's works, by the way. When he died he did not leave many books but the Shakespeare was one. Also there was a book by the great German Jewish philosopher Moses Mendelssohn, grandfather of Felix. It is fascinating to snoop through Mozart's library! One day we must do that thoroughly.

For now, back to "Anonymous." In the movie, Mozart's and Shakespeare's paths cross.

While the Earl of Oxford is getting married the soundtrack played Mozart's Requiem.

The music was not actually written until what, 200 years later? So it was kind of a mistake. On the other hand that stark, powerful music fits strangely with any age. It could be a soundtrack to an Elizabethan movie, or it could be futuristic. It is timeless even though it epitomized its age. Sort of like the piano artistry of Leonard Pennario. I gravitate toward greats!

But talking of Mozart reminds me: As far as I could see, there was no mention of him in the credits!