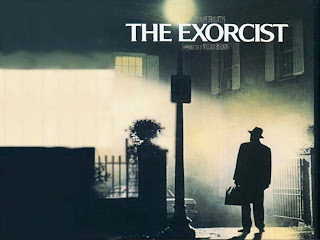 Today I was following my brother George to the Clinton-Bailey Market and on the radio I caught an interview with the author who wrote "The Exorcist."

How lucky was that?

I never read that book but one day I am going to. I did see the movie but it was a special edition that came out a couple of years ago. It had some scenes that I guess were not in the original. Holy cow -- or unholy cow, I should say -- I had to sleep with the light on!

Before today I could not have told you who wrote "The Exorcist." Now I realize he was originally this comedy writer who wrote screenplays for Inspector Clouseau movies, among other things.

In the interview he says: "I am hauled out of my burrow every year around Halloween as if I were some furless, aging demonic Punxatawny Phil. It always brings a smile of amusement to my lips."

Asked about "The Exorcist," he also says, believe it or not: "I have zero recollection of any intention to frighten the reader in the slightest." Amazing.

Blatty is 84, I think. I did not get to hear the whole interview on the radio because we got to the market and I could not just sit there in the car with George waiting. But when I got home I found it on YouTube. Fascinating! You get to hear Blatty reading from "The Exorcist" which is priceless.

Blatty says several priests told him "they had never seen such a thundering herd of people coming to to the confessional as they did after the release of this novel."

Hahahahaa! Well, really it is no laughing matter. I am laughing becasue that reminds me of something.

A while ago on Catholic Radio there was this priest taking questions, and the talk turned to the occult. The priest -- I forget who he is, but he is very mild mannered, and I think he is local -- told about a time when the rectory doorbell rang late at night and it was a group of teenagers scared out of their wits.

They had been playing with a Ouija board and happened on something, something that scared them. That was why they had come to the church, because they were scared. The priest took them inside and prayed, and I guess the problem was solved. I wish I recalled more of the details, but the thing is, I was too diverted by this one thing I could not help laughing about.

That was the thought of these kids with this Ouija board -- you would just love to have been a bug on the wall and hear who it was that made the call.

Because they had to be really desperate to show up like that!

Also, I bet they never went near a Ouija board again.