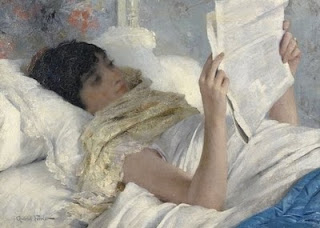 Zut alors, I have caught cold! I am going to say it that British way from now on.

Yesterday I could hardly even get out of bed!

I slept and took Nyquil and slept some more and in between I did a little bit of work on my book. Above is a painting of me poring over old newspapers. I usually could read for about five minutes and that was about it.

One thing, though, through dumb luck I was prepared. When Howard said to call him if I needed anything I was able to say that I was pretty sure I did not need anything! Because I did not.

A couple of days before I had made this gorilla chicken broth, I mean I really had not worked on it, just tossed some bones and an onion into a pot and simmered it for a couple of hours. When I put it in the fridge I remember thinking, why did I bother with this? Well, thank God I did. Because yesterday it came in handy, bones and all. I did not even strain it! I was too weak. I just skimmed the fat off it and then cooked some carrots and onion and celery in it and some leftover pasta and then poured hot sauce into it and ate it. Yum!

Today I made spicy chili. That was easy because for some reason I had cooked up a pound of pinto beans a few days ago. Again, yay me! Plus today although I was not able to leave the house at least I could stand on my feet again.

Well, things could be worse. At least I do not have to go out on a concert stage and play a piano concerto. Pennario used to do that when he had the flu. He used to just go. Out. And. Do. It.

I could never do that!

But I have to say, I did deal pretty well with this cold. I think by tomorrow I should have it beat. I credit the chicken soup and the spicy chili.

Thank God I have me to take care of me!
Posted by Mary Kunz Goldman on October 15, 2011

I saw your page and I find it very interesting. I like that you included my blog under the heading of favorite blog is dedicated to collecting the best pianists in history, with links to live performances and links to his biography.
If you agree, just leave a comment in any of my posts, and I will include it to you.
My blog is:

Thank you very much for your time.

I would like to know when your book on Pennario will be out. Or have I missed it? I was a piano major in the 60's in college and graduate school. When I was in high school Mr. Pennario's recordings were my introductions to much of the basic repertoire. I had the privilege of hearing him in person 4 times. I met him on 3 of those occasions. He was always gracious and willing to answer my questions. I'm sure you've been to pennario.org. looking at those album covers really brings back memories! I'm looking foreward to your book!
Randy Wright