Mary and the Giant Peach 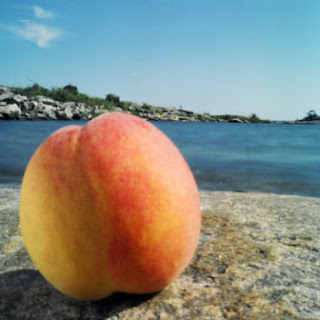 Remember the peach chutney? Perhaps you do not. It was just a footnote in my life last week.

Well, it sure was not a footnote in my life yesterday.

That was because it was such an extreme pain in the kiester, to use a beloved Buffalo expression.

Isn't it funny how you can do something once and it is no sweat at all, la la la la la -- and then you try it again and it is a major endeavor? That is what happened yesterday. Perhaps the peaches were different. Perhaps the barometric pressure was different. I do not know what it is!

What happened was, my brother George dropped off another huge amount of peaches from the Clinton-Bailey Market. He did that on Saturday, the day I was having a party for a bunch of people from work. People always drop off use-'em-or-lose-'em fruits and vegetables only happen when I am having a party and the pressure is on.

I did manage to get the peaches out of the big plastic bag immediately, but even so they began to rot as soon as I looked at them. I mean, you could stand there and watch them and see them going before your eyes. I ate a few of them and they were delicious but you can only eat so many peaches, you know?

On Sunday I had Leonard Pennario correspondence to take care of and I did not get around to the chutney until the evening. What a struggle!

They would not peel! It is not as if I do not know how to peel peaches either. You dunk them in boiling water and then the skin slips off. I did it just last week with no problem!

The onions would not peel either. When I chopped them it was like mustard gas! My eyes were killing me!

Now it is the next morning and the stuff looks OK. But what in the world, you know?

Last week this was easy!
Posted by Mary Kunz Goldman on October 10, 2011