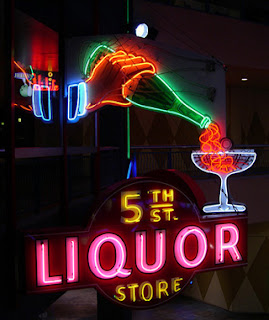 Today after work I stopped by to see my mom and on the way I decided to stop by the liquor store I always go to. This is the liquor store where I like to by the Tisdale wine. Remember Tisdale? That is not the liquor store pictured above by the way. I wanted a picture and so I used that. Is that the coolest sign ever or what?

But back to what happened today. I head on over there and the liquor store is gone!

It is boarded up!

It turns out that is the liquor store that, someone drove through its front window last week.

We had all those situations of people driving through windows by mistake and this was the liquor store that happened to. I had not realized it was this store! Whoever told me about it said, "Harlem and Kensington," not "Kensington and Harlem." The liquor store is on Kensington and if I had heard that, I would have known.

Anyway, I feel bad about this little liquor store. We do not think it will reopen. It was never a very big business and I and my Tisdale are not about to make anyone rich.

At first I heard no one was hurt. I figured that was because the Irishwoman who owned the liquor store normally sat in the back, eating her dinner or doing whatever. She would go into the front when there were customers.Now I am looking up the story, which somehow I missed when it ran, and I see the owner was hurt. So was a customer, though the customer was treated at the scene.

What a shock! You never think you will get hurt standing at a counter. That liquor store owner and I were always standing at the front counter, gabbing. She would always ask me how my book was going and I always liked that about her even though I was never sure she knew who Leonard Pennario was.

She has a thick brogue and was fun to listen to. She and I were up there in the front yakking the day that Congressman Chris Lee resigned because of the shirtless photo... 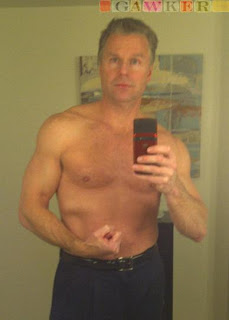 ... on Craigslist. Another customer came into the store and told us about it. I did not know him but he knew all about the situation and filled us in. I remember he had just been on the phone with the local head of the Republican Party. That is so Buffalo, strangers talking to each other. We were all distraught.

Now I am distraught learning what happened!

Wasn't that crazy last week? There was that tragic situation with the car crashing into that cheeseburger restaurant, with the two people killed. Terrible to think about. Then there was the Family Dollar where the lady who crashed into it supposedly went next door to eat afterwards. When they approached her about it in the restaurant she said, "Get out of here!"

And in between those two places was dear little Kenwin Liquors.

It was as if half the drivers in Buffalo lost their compass!
Posted by Mary Kunz Goldman on September 27, 2011