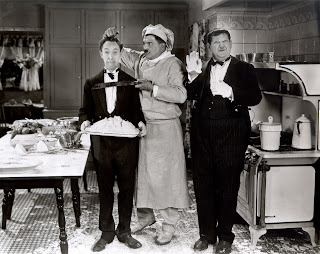 One important reason I got along with Leonard Pennario was that we were both Laurel and Hardy fans. So. The other day, there I am, hard at work, and I go to refer to a Pennario recording on YouTube. And you know how YouTube gets to know you pretty well? And it has suggestions for you?

YouTube hit me with a suggestion for Laurel and Hardy's cameo appearance in "Hollywood Party."

Hahaha! There is something about that title, all by itself, that gets me laughing. It is like "House Party" or "Vegas Vacation." Gosh darn you, YouTube, I had to take a look!

I told myself Pennario would have wanted me to.

Let me tell you this, I was laughing so hard within 15 seconds I was actually crying.

Just the beginning of this thing, how they waste no time in setting it up. Ding-dong, goes the bell. All these glamorous people turn to look. By the way, what a great glimpse of a glamorous, 1930s-era party. You just want to stop the video and take a good look.

Laurel and Hardy films always have great peripheral characters. This butler, his sense of timing is perfect. Then, the way the attendants line up and bow down. I was dying.

Then later, the egg episode. For a story I wrote about Lucille Ball a few weeks ago I was watching the Lucy grape-stomping episode and I can see she used a lot of the same tricks, the same expressions. Anyway, great, great vaudeville.

Howard is more of a Three Stooges guy so for his sake I watched the Three Stooges. We picked out this one on YouTube. It ended up Howard had not seen it before.

Ha, ha! It is funny, maybe I am more demonstrative than Howard but again, I was totally on the floor. Howard was sitting there kind of quietly appreciating it and I was honestly howling, I was laughing so hard. Honestly howling, that is not a phrase you hear every day. But I was!

Just the way they exploit everything that comes into their path. The giant saw. You could just see the potential of that, snapping this way and that. By mistake they start cutting the one Stooge's head and it ruins the saw.

Then when Curly winds up on top of the oil well gusher. You can't even describe it.

Even the bad puns, I love them. "The oily bird."