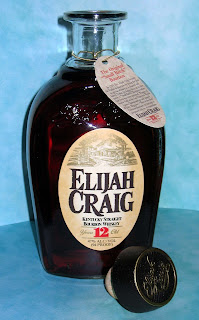 Today is Howard's birthday! Last night I gave him an early birthday present. It is traditional for Howard and me to present each other, on our birthdays, with yummy bourbons which we sip slowly over the course of the next year. So I gave Howard a bottle of Elijah Craig.

I love that name, Elijah Craig! I love those hoary old 18th century names out of Kentucky.

And I liked the unusual bottle with its wide cork. When we are finished with this bottle I can use it for salad dressing or something.

But the most important thing was, this Elijah Craig whiskey, which I had never heard of, got tremendously high ratings. The reviewers all said it had a wonderful butterscotch taste, it lingered, it was smooth and honeyed and delicious.

While we sipped it we read the little tag that came with the bottle.

Working on my book I should declare Leonard Pennario the father of something. I will have to think on how to word that just right.

Speaking of fathers, you have to wonder if the Rev. Elijah Craig, despite his frontiersman name, was a Catholic priest. I mean, would a Bible belt pastor be making whiskey?

I will have to scour the fine print to see if besides making whiskey he held Bingo games.

Well Mary, if you can believe Wikipedia, the good Rev was a Baptist preacher! He invented bourbon!

Aha! Thank you Sally! A Baptist preacher inventing bourbon, who woulda thunk it?