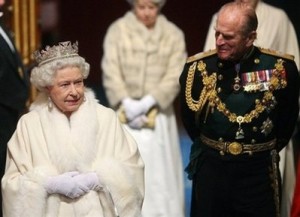 Since wishing Prince Philip a happy birthday I have learned that in certain circles he is a god! My friend Stephanie sent me the story which, all I can say is, you could not make this up.

It would be hilarious to hear what Prince Philip thinks of this. But I guess you can imagine.

A classic picture of the prince accompanies the story. He is arriving at a horse race with his granddaughter, Princess Beatrice, who is sporting a polka-dotted dress.

Above is a picture of the prince with Queen Elizabeth. I have to say this, the queen always looks pretty happy with him. Admittedly I am just a casual now-and-then onlooker but that is how it looks to me. She seems always to have loved him... 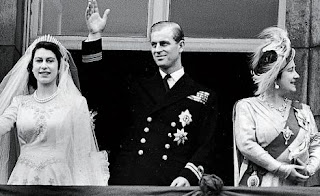 ... even though the Queen Mother apparently didn't. That is the Queen Mum on the right, looking away!

Another thought has struck me and then we will leave the matter of the royals for the time being.

At Budwey's yesterday buying Shur-Fine Diet White Birch Beer, there on a tabloid cover is the new princess, William's wife, what's her name, Kate Middleton. And a big story on what she was wearing.

I stopped for a moment from brooding about the slowly, insidiously, rising price of Shur-Fine diet pop -- did they think I would not notice, that it goes up 50 cents every week, for a 12-pack? -- and I thought for a moment about Kate and her fashions.

This is it for her, I thought. I hope she likes it.

Because guess what, this is her life!

I am not feeling sorry for her. As Howard said memorably once, about Princess Diana, "Whatever she went through, it can't have been worse than a job."

The younger set of royals, they all just strike me as kind of dumb, I am sorry. Likable but dumb. You never hear them mention any classical music they like or any instrument they play or any poet. They are all about fashions and nightclubs.

I would bet Kate Middleton does not even know who Leonard Pennario is.

Now that I think of it I cannot think of one memorable thing that she has said.

But then Prince Philip is a god.
Posted by Mary Kunz Goldman on June 11, 2011