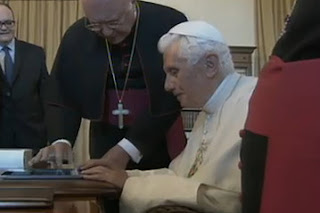 The Wall Street Journal has a great video of the Pope Tweeting.

It is great to watch His Holiness walking into the room and everyone kneeling and kissing his hand. It is so obvious how that is business as usual, that is the way things are done, well, when in Rome. After making that spectacular entrance the Pope sits down at the I-Pad and sends his first Tweet. At least it is his first English language Tweet.

Ha, ha! I love watching the look on his face as they are telling him about it and reading it aloud. That is the way Leonard Pennario would get when anyone tried to get him to pay attention to the Internet. Pennario never wanted to look at anything on line but he liked me to tell him about it.

Just the way Pennario did, the Pope has a pretty good head of hair, I cannot help noticing. Beautiful white hair.

I am going to have to figure out how to follow the Pope on Twitter. Perhaps if I entertain him I will have his ear and I can complain about things in the Church that are bothering me.

On the other hand forget things in the Church that are bothering me. The Pope and I can Facebook and Tweet into the night about the piano music of Schubert.

Watch him start playing Farmville. He will go up against Don Paul. We will be reading messages like, "Benedictus XVI is working in the stables." "Benedictus XVI has harvested a bushel full of yellow squash." That is how he signed his Tweet, Benedictus XVI.