Bring it to Gerome 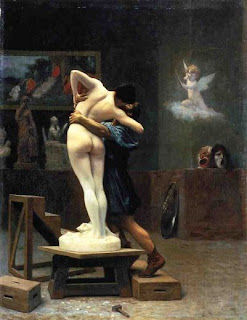 This never happens, but Howard and I were out of town a few days. We went to the Finger Lakes! Why we wound up doing this and how exactly it happened is a long story. One thing that happened was through a strange sequence of events we wound up spending a night all by ourselves in a remote manor house called White Springs Manor.

We had a corner suite called the Nicholas Suite. There was a fireplace by the bed and over it was the picture pictured above. It is "Pygmalion and Galatea" by the 19th century French master Jean Leon Gerome.

The picture had a big ponderous frame and a plaque stated the artist and the title, is how we know that.

At first I did not recognize the painting's greatness. I laughed. "Look at that," I said to Howard. "Obviously the artist only wanted to draw that woman's bottom. Ha, ha!"

But Howard thought the painting was interesting and not just because of the butt. Then I came down off my high horse and took a look at it too. After that we could not stop looking at it. The painting became to us like a home entertainment system. There was a TV but we never turned it on. Instead we sat on the bed and sipped whiskey and looked at the painting and talked about it.

Here is Howard studying the picture and absorbing Gerome's genius. 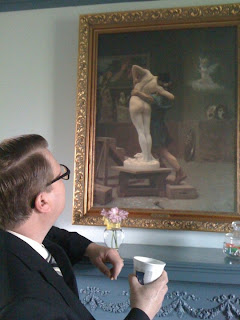 We got on the iPhone then and read the story of Pygmalion and Galatea. Pygmalion was a sculptor who thought he did not like women but then he carved one out of ivory and fell in love with her. It is a long story but Aphrodite, or Venus if you read the Roman version, brought the sculpture to life. The sculpture was Galatea.

And they lived happily ever after!

That is how the story goes. We checked it on several sites. But face it, something is sinister about Gerome's painting. Something is not right. Howard and I kept talking about this. The coloring of the painting is unsettling. The ivory jumps out at you but it goes beyond that.

We figured the sculptures to the left are other works the sculptor, Pygmalion, has in his studio. And Howard admired how Gerome's depiction of an artist's studio had the ring of truth. There is that tool lying in the foreground. The crates lying around. Pygmalion would apparently stand on the crates while sculpting his statue. Howard loved the fish at the figure's feet and I do, too. Also notice how Gerome signed his name on the statue's pedestal. All these touches are so sweet and so human.

But what is with the grotesque faces to the right? Are they masks or what? There is a face too on the shield and that is grotesque too and unsettling.

Something in Gerome's mind was not happy with the story.

I am thinking it might be because Gerome was Catholic and did not like the myth's pagan overtones. He was Catholic. I read that. Perhaps he was not comfortable with glory going to Aphrodite, or Venus, as the case may be.

But I have no idea if he would work something like that into a painting. I am just the person on the next barstool. Perhaps Jean Leon Gerome had an authorized biographer the way Leonard Pennario has me. If so, if that person would please advise me, I would be most grateful.

Whatever the significance of the various figures, all night long Howard and I slept with the fireplace burning at the foot of the bed and this painting, "Pygmalion and Galatea" by Jean Leon Gerome, overhead.

It was a most Gothic night!

Once I awakened and I did not even mind awakening. Because I got to lie there and appreciate how strange it all was. I was thinking, when I list the strangest evenings of my life, this might well be one of the greats. Our being alone in one corner of this remote manor house, in the middle of nowhere. The fire burning. The shadows flickering on Galatea's ivory rear.

Truly that painting is the work of a master, to captivate us so.
Posted by Mary Kunz Goldman on May 18, 2011

Email ThisBlogThis!Share to TwitterShare to FacebookShare to Pinterest
Labels: Art