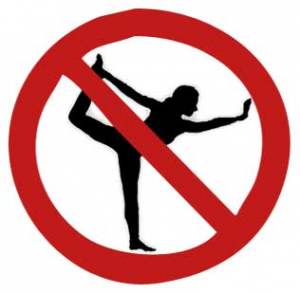 It starts when I go to the chiropractor. And I was asking her advice about flexibility issues. I do all that Zumba dancing but like a lot of people I am stuck sitting at a desk a lot of the day. That is one reason Zumba feels so good. It feels great to jump around!

Anyway the chiro, she told me that she always recommends yoga. Immediately I brightened. I had gone to a few yoga classes a while ago, remember, but since then I fell off the yoga wagon because there just was not time for that, Zumba and the Pennario project. Plus the yoga teacher I liked, her classes are at terribly inconvenient times. The gym behaves as if nobody works, as if we are all ladies of leisure! But that is a gripe for a different day.

Now I thought, I will go back to these yoga classes. I will figure out some way. I will use this as an excuse to buy new yoga clothes! And maybe a yoga mat of my own.

Later after Zumba class I go to my mom's. And honest, this happened as soon as I walked in:

My mom says, "There was something I wanted to talk to you about. What was it?"

She has my dad's old habit of jotting notes down on junk mail envelopes. She makes a beeline for the coffee table and rifles around.

"What was it?" she asked rhetorically. "It was something I heard on EWTN." My mom is a Catholic television addict.

And I just knew, because this is my life.

She looked at me. "Yes! Oh, here it is." She had found the envelope.

Apparently on this show "Women of Grace" they had gone over yoga and how the Vatican expressly forbids it. They had gone over this point by point. My mother had written down every one of these points. I do not remember all of them but one is that yoga teaches you to focus on yourself and not God and another is that by doing the poses you may inadvertently wind up worshiping a Hindu god.

That would be terrible!

Imagine, this Hindu god out there somewhere ... 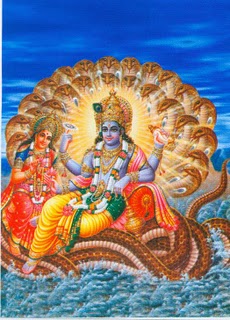 ... all of a sudden going: "Why am I hearing from Mary? I thought she was Catholic. Hmmm, very very interesting, to be hearing from her."

Meanwhile there I would be at the Buffalo Athletic Club, trying to figure out how I am going to untangle myself from some pose  ... 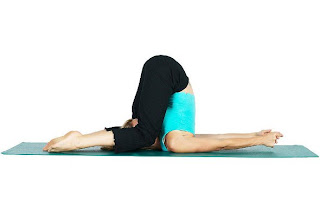 ... and totally unaware that to add to my problems I have established contact with Vishnu.

I admit, I was bummed. I had an idea. "There is a class called PiYo," I said. "It combines Pilates and yoga so there is no meditation or anything like that."

My mother shook her head. "Not if it is mixed with yoga, no."

I want a second opinion, I said. If the Vatican forbids this I want to see it. So when I got home I got on the Internet. Well. All I can say is, good luck answering this question. It is impossible to find an official answer. What you find are a lot of Catholics in the peanut gallery, like me, saying this and that.

"Geesh, I've been doing yoga on and off for years," begins one typical comment. I mean, give me one reason why I should listen to you, you know?

Some priests say one thing and some say another.

Through many twists and turns I managed to find this long Vatican document which, I cannot imagine wading through it.

I do not have all day to pour into this pursuit so I am going to go with my own reasoning. Which is this:

What are the odds of my mom finding all this out on the very day I had been to the chiro and decided to start doing yoga again? I am afraid I have no choice but to take this as a sign and quit the yoga.

It is no big sacrifice. To tell you the truth it did kind of bug me how the yoga teacher would end the class with a long session of breathing in one nostril and out the other and telling you to let this feeling carry you through the rest of your day. I did not need this feeling to carry me through the rest of my day. That is not what I am in yoga for. Was in yoga for. Ahem.

Also, let's be honest: there is something endearing about a religion that frowns on yoga but has no problem with Zumba.

Email ThisBlogThis!Share to TwitterShare to FacebookShare to Pinterest
Labels: Yoga

I read this aloud to my mother and husband. We are still laughing.
Ohm!

I don't know whether to laugh or cry. Somewhere in Dubliners, Joyce has someone say something about the Irish being a priest-ridden people. They don't have an exclusive patent. Joyce apparently never ran into Polish or German Catholics!

Not sure what this says for my prospects as I've gone off and on the Evolation Yoga studio over on Elmwood for some time now. It's the hot yoga so maybe that is foreshadowing.

Ohm, I just saw these three comments! What has it been, a month? I need to slow my life down somehow.

I am still not doing yoga! Mike, you will have to say hi to Vishnu for me!