Have statue, will travel 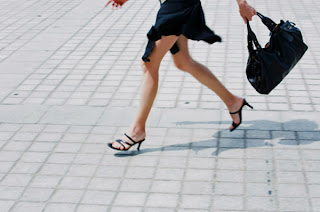 So on Saturday I wrote, all breezy-like, about having St. Anthony on loan from my parish, St. Anthony of Padua. In the  morning, it was time to pay the piper and pass him on to his next hosts.

This was not just any Sunday morning. I was really underslept. We were out lastnight late and I got to sleep late and then I was tossing and turning because I had a packed day the next day. 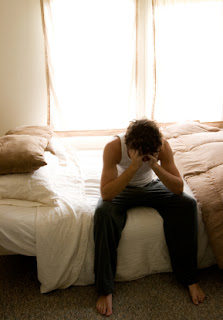 Does that make no sense or what? You have a long day ahead and your body responds by not sleeping. Nature at its worst!

Speaking of nature, I got hungry but I was afraid to go downstairs and eat something for fear I would run into the mouse. This mouse surfaced in the kitchen the night before and Howard took this picture of it. 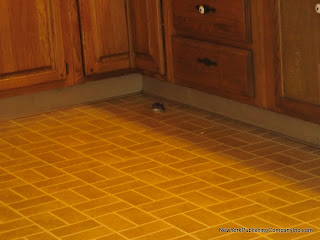 End result, as we say here in Buffalo: The next morning there I am on five hours' sleep facing all these complications.
The morning was bright plus it was Laetare Sunday. Laetare means Look Alive. Well, actually, it means rejoice. It is supposed to be a bright Sunday in the midst of Lent, to keep you going. I did not feel I could go to church on Laetare Sunday looking like death warmed over.
So I found something springlike to wear instead of my usual black tights and boots. Miraculously I found shoes and stockings. This was all done in five minutes, tops.
Next thing was to get St. Anthony out the door in addition to my missal, my veil and a cup of chai tea. Not easy! This big statue. I almost did not bring him. I will keep him for one more week, I told myself. I will say I forgot.
What if I lost him? That is what Howard said.
"How could you lose him? He's so big," I said.
"But what if you lost St. Anthony? How would you find him?" Howard said. Stupidly, I missed his joke. He had to explain it to me, that St. Anthony is the patron saint of lost objects.
If you lost St. Anthony who would there be to find him?
I am such an idiot when I am underslept!
Finally I did get out the door, St. Anthony and chai tea and all. The tea was because I had not had time to ingest any caffeine and with no calories it would not violate the pre-Communion fast. That was my rationale anyway. If I was wrong I do not want to hear about it.
I made it downtown and to church and immediately saw Trisha, the gal who had asked for St. Anthony next, in her pew. I waltzed him on over there and handed him over. There you go, Trish! Then I slid into my seat in time just in time for the Asperges.
A wing and a prayer. It is the way I do the Pennario book.
I am afraid it is how I live my life!
Posted by Mary Kunz Goldman on April 03, 2011

You don't want to hear about it? What about on judgement day when the recording angel asks "Do you remember a thing called chai tea?"

Save me a seat by the fire.