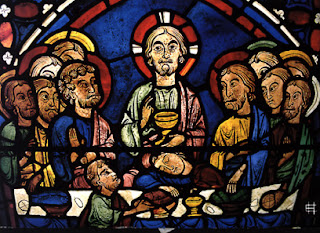 Last night I performed my most dreaded bit of Lenten penance, going with my mom to Holy Thursday Mass. It is dreaded because I am used to the, ahem, TLM (nerd abbreviation for Traditional Latin Mass).

There is no TLM on Holy Thursday! Or if there was, I could not find it.

That is a shame!

So I am stuck going to Christ the King in Amherst with my mom, just like last year. Christ the King is land of altar girls and jazzy, contemporary light Broadway songs, sung with a piano. Things that do not exactly help to get your mind around the Sacred Mysteries, you know? Maybe other people are smart enough to get past stuff like this but I am not.

I was aghast when in the middle of Mass, the ceremony was stopped and we were told by a lector to raise our right hands in a blessing for the priest.

Since when do we bless the priest?

Isn't he supposed to bless us?

Oh well, enough griping. God looks out for me and at Communion time everything magically improved. The choir sang Mozart's "Ave Verum Corpus" and not only that, they sang it twice! That link is for my favorite performance of "Ave Verum" on YouTube. It is conducted by Leonard Bernstein and it is one of the few non-Leonard Pennario videos that I watch over and over.

At the end they did the beautiful hymn "Tantum Ergo" and they did a couple of verses in Latin. Which pleased fussy and crabby me. And as according to ancient tradition, the priest moved the Blessed Sacrament to a stunningly beautiful side altar.

Then, again in accordance with ancient tradition, the ceremony ended in silence.

Even the chit-chatters stopped chit-chatting! This silence at the end of Holy Thursday Mass broadsides everyone. It just feels so strange, so unnatural, not to have a closing hymn, not to have anything. The power of centuries sweeps over you. People were thrown by it. You could see them looking around, uneasy, disoriented.

Many of us, my mom and me included, took a minute to kneel in the jarring silence before the side altar which, as I said, was so beautiful. I took a picture which I will post as soon as I figure out how to get it out of my phone. You will love it!

After that I went back home with my mom and continued my contemplation of things eternal.

And had a glass of wine which did not hurt.
Posted by Mary Kunz Goldman on April 22, 2011

I have been to Holy Thursday Mass in the Extraordinary Form once.. and loved it. There are just too many people prancing around the sanctuary and "doing things" for me. So I feel your sacrifice.

I had to work so was not able to do my annual Lenten sacrifice of going to a contemporary style Liturgy en-lieu of the Traditional. I did manage to stop in and visit our Lord in the Blessed Sacrament after work.. which made for a lovely.. and QUIET visit. :)

You would have loved St. Matthew's circa 1962 where everything was elaborately rehearsed for maximum theatrical solemnity. There was no bedside manner involved.

Prof., that sounds wonderful!! When a time machine is invented that is where I will go, back to 1962, back to St. Matthew's!

And Bing, thanks for the sympathy! I love how you refer to the contemporary Liturgy as "my annual Lenten sacrifice." Ain't that the truth!