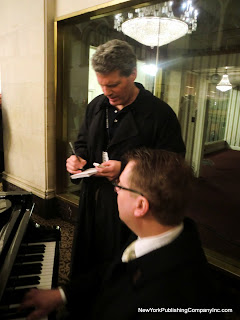 What with all the excitement involving my office supper club, I forgot to mention that Howard was the subject over the weekend of my colleague Donn Esmonde's big Sunday column which is, I will have you know, read by millions and millions of people.

Above is a picture of Howard being interviewed! I took the picture.

Luckily Howard stopped playing of his own accord and the interview proceeded and the result was this masterful column. It is about how Howard helped get the Buffalo Statler Hotel on the road to renovation and good health.

Donn Esmonde said it is a very good story. I began waxing poetic to him and said it was about the power of the private citizen, what you can do when you see something that needs to be done.