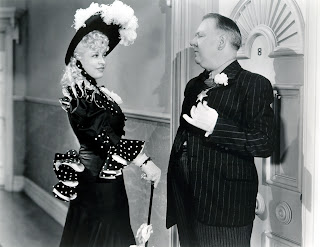 Blog-O-Land is wonderful. You post a question and someone will answer it.

For instance the other day I wrote about a bird chirping in my back yard, for the first time in 2011, and it made two notes, the second lower than the first. I did not know what bird it was. But now that question has been answered. The bird has a wonderful name.

It is the Black-Capped Chickadee!

I had never known a chickadee was an actual bird. I thought it was something vaudeville comedians made up. I said something last night on Facebook about Mae West but then in the cold light of day I realized it was W.C. Fields. Now I see the reason I thought it was Mae West was that she was with W.C. Fields in the movie called "My Little Chickadee," a still from which is pictured above.

"Come to me, my little chickadee." That is what W.C. Fields used to say! My father would imitate him.

Here is a picture of the Black-Capped Chickadee. 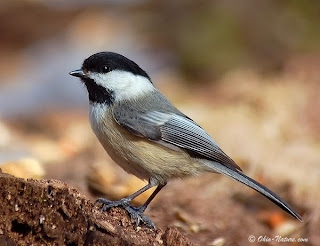 Howard and I blew half the night watching W.C. Fields. And I was reading up on him. The Internet makes this time-wasting all too easy. Hmmm, I did not know W.C. Fields was on the cover of the Beatles' "Sergeant Pepper's Lonely Hearts Club Band." (There, now Beatles fans will find themselves inexplicably on the Leonard Pennario Web log). I also like Wikipedia's list of Fields' supporting players, the actors he worked with again and again. There was Kathleen Howard, "as a nagging wife or antagonist." And "Baby LeRoy, a pre-school child fond of playing pranks on Fields' characters."

All this knowledge gleaned, thanks to that little chickadee! Which, by the way, I do not hear right now. Even though it is the morning and not chilly.

Come to me, my little chickadee!

News flash: The daffodils are also up. Last night I checked and there they were. They were an inch high. They will be in this holding pattern for at least another month but still.

Spring is on the way!
Posted by Mary Kunz Goldman on February 17, 2011