Christina Aguilera and me 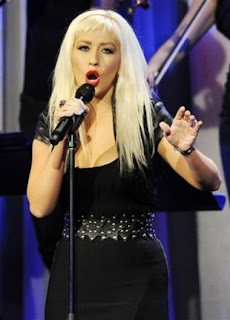 Isn't that strange? I never heard Leonard Pennario live but I did hear Christina Aguilera live.

But anyway, about the anthem. I agree with this writer that my Facebook friend Ward Hamlin posted on Facebook. This author, Mark Corallo, says oh say, the anthem is not a pop song. It should not be subject to all those vocal curlicues that pop singers love to affix to everything they sing.

I have felt the same thing about some Christmas carols. You hear some R&B singer warbling through "Hark, the Herald Angels Sing," and two bars into it, poor old Mendelssohn's noble melody is totally lost. My sister-in-law Natalie does a great imitation, by the way, of those singers. It is getting to be a Christmas Eve tradition, that Nat mimic one of those singers singing "Hark the Herald" or "Joy to the World."

Back to the anthem. At my mom's house, my mom and my brother George and I were discussing the Super Bowl situation and I proudly invoked the name of my grandmother, Barbara Geber. She was my mother's mother. She was the soprano soloist at St. Boniface Church. And she used to sing the National Anthem at Offermann Stadium. 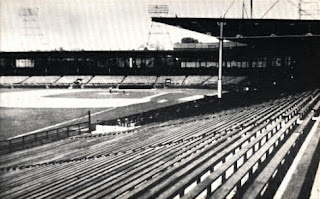 When I mentioned that, proudly, my mother said, "She never sang the National Anthem at Offermann Stadium."

My mom patiently repeated what she had said.

"But you always told me she used to do that, once in a while."

"I told you that?" my mother said.

"Yes! I'm sure!" I could not believe my ears. "I'm sure you told me she used to sing the National Anthem."

"She did sing it, yes," my mother said. "But not at Offermann Stadium."

"Well, I know she sang it," I said. I mean, do not we all sing the National Anthem, in the shower or something? Now George sees how ridiculous the conversation has gotten and he starts laughing.

This was a big bummer. All my life I have been proud of this story. I have bragged about this to a million people, that my grandmother used to sing the National Anthem at Offermann Stadium. I bragged to Pennario about it. I may even have written about it in the paper. I do not think I would even know what Offermann Stadium was were it not for that story. Wasn't it knocked down before I was born? How would I screw something like this up?

Next thing you know I will find out my grandmother was never the soprano soloist at St. Boniface.

"She did sing hymns, yes, but not as the soloist at St. Boniface Church."

Here I thought I was descended from greatness.

Thanks a heap, Christina Aguilera!
Posted by Mary Kunz Goldman on February 09, 2011