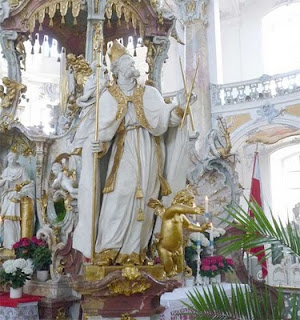 Today I got my throat blessed! I think I confide this to the Web log every year! But it is a topic that is forever new.

All I did was write on Facebook "Got my throat blessed!" and I got all these comments! I could write that I had finished my book on Leonard Pennario and it would not get half as many comments as I get just by saying I got my throat blessed.

My favorites are the people who go, "Oh, I remember when they used to do that." Get with it, they still do it!

St. Blaise's actual feast day is Feb. 3. Someone on Facebook tried to argue me and say it is Feb. 2! We are passionate about St. Blaise here in Buffalo.But according to my missal it is the 3rd.

Here is a painting of the tormenting of St. Blaise. It was painted by a follower of Caravaggio.Caravaggio did not wait for Twitter to have followers! The painting is chilling to look at with the person on the right smiling like that. 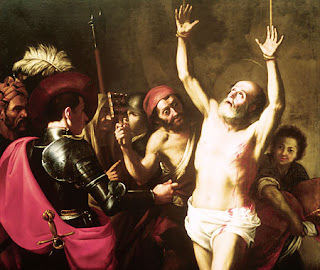 This picture, "The Scourging of St. Blaise," is in the Tweed Museum in Duluth. Here are directions to the Tweed, which is a name I love, so you can go and see it in person.

I had not known St. Blaise was a physician. Here is everything you wanted to know about St. Blaise but were afraid to ask. This is cribbed from a most amiable Web log.

Tradition tells us that St. Blaise was a physician in Sebaste before being elevated to the episcopate and was a man of such kindness and persuasion that he once talked a wolf into releasing a poor woman’s pig. He was martyred in the early 4th Century by being beaten, raked with iron combs, and beheaded. His reputation as a healer made his cult very popular in the Middle Ages and he is counted as one of the 14 Holy Helperscommemorated in the formerly Cistercian Basilica of the Vierzehnheiligen near Bamberg.

Blaise has been invoked for a number of causes over the centuries. He is counted as a patron of wild animals and veterinarians and was popular among wool carders in England, who credited the saint who was torn with combs, with bringing them prosperity. His primary cultus, however has been around his protection from illnesses of the throat, a logical attribution for a physician who was beheaded.

When we get our throats blessed here is how it is done. 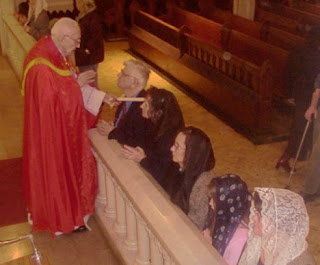 The priest says: "Through the intercession of St. Blaise, may God protect you from all ailments of the throat, and from every other evil."

It is marvelous in Latin. Let us cut and paste: "Per intercessionem S. Blasii liberet te Deus a malo gutteris et a quovis alio malo."

Gutteris, that is throat. As in guttural. Perhaps as in gutter! Gutters are kind of like throats. The water goes down.

Some people say that after St. Valentine's Day you may believe that it is early spring. Others say St. Patrick's Day, a month later.

Whatever, the important thing is, it does not mean that I will take down my Christmas tree.

It is still green and healthy!
Posted by Mary Kunz Goldman on February 06, 2011

Hey Mary! I enjoyed reading your blog on the 14HHs. I was just reading about them yesterday, and despite my attending school there, I never knew the story of them!

Though the church in West Seneca (Gardenville) has been sanitized of its tradition over the years (white washed walls and stations, illogically re-arranged pews and statuary, removed communion rails) to the point that it hardly feels Catholic, the stained glass windows depicting the 14HH are something to see!! While attending mass as a kid, I spent many hours staring at the windows when maybe I should have been paying attention! ;)

Tim, thanks for your note!! I have to, have to go to Fourteen Holy Helpers one of these days. For all my interest in the place I have never been inside it, only walked around it that one time. I would love to see those stained glass windows. BTW when you looked at them as a kid, you were paying attention! That is exactly what you were doing!