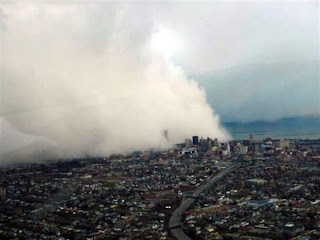 I saw this amazing picture on Facebook so promptly ripped it off. It is a picture of the kind of drama Buffalo is subjected to on a daily basis in these months.

It is lake-effect snow!

Who knew a lake effect snowstorm looked like this? To think I was in the middle of that cloud of white. I was downtown that day. This was in the first days of December 2010 when all those drivers got stuck on the Thruway.

I was not aware of the drama that surrounded me! To me it was just another snowstorm. You have to marvel at how we have gotten used to this dramatic weather phenomenon. In the picture you see Buffalo huddled on the edge of the lake, in the snow, taking it the way we have always taken it.

The picture was described on Facebook as depicting the Magic and Mystery of Leonard Pennario. Did I say Leonard Pennario? I meant lake effect snow. It is that kind of a morning.

The picture was posted by Mary Beth Wrobel who does the weather on Channel 2. Mary Beth also sings a mean "Dove Sono." That is one of the most beautiful arias ever written! The Countess in Mozart's "The Marriage of Figaro" is wondering where all the happy times with her husband have gone. Her husband is cheating on her and her life has fallen apart. Mary Beth and I performed "Dove Sono" together once at Babeville with me on piano. We played at Babeville because both of us are babes.

Then I watched the Leonard Pennario video where in addition to hearing him play a devastating Chopin etude you can see more Buffalo snow.

What am I doing? There is the morning to contend with.

I beleive the Dove Sono night at Babeville was the night we met. No?