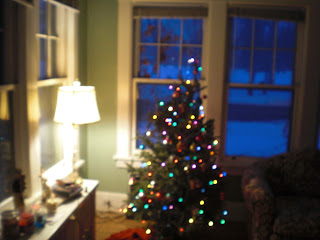 Today at Mass they played "Joy to the World" and "Adeste Fideles" which makes me feel justified in still having my Christmas tree up. I took the above picture the other day.

Perhaps when I am done making dinner I will listen to my Carmen Dragon Capitol Records Christmas album again. Already it is only 11 months until next Christmas. We are moving right along here in 2011, that is for sure.

It feels like Christmas also because I heard from a gentleman in Germany yesterday that there is this footage of Pennario playing that exists from French TV. That is so exciting! Exactly what this French TV is I do not know but I wrote him back and I am sure he will write back and tell me.

I keep checking my email because I cannot believe this luck.

It drives me crazy, looking at YouTube, because there is tons of video on every pianist in the whole world with the sole exception of Leonard Pennario. I was thinking there had to be some kind of film of Leonard, there had to be. But so little has turned up.

This film footage from French TV has him playing an array of solo pieces including "Le Tombeau de Couperin." To see that, to see him playing that. I cannot imagine.

That is the recipe I am making tonight while I am waiting and hoping. It comes from the cookbook I bought at the Greek Festival. You cook the chicken slowly in a tomato sauce with cinnamon and allspice.

The cookbook is called "The Midas Touch III: Golden Greek Goodies." I spent something like $10 on it a couple years ago. It is worth every penny! Not only for the title but because of what comes next: "Published by the Women's Philoptochos Committee of the Hellenic Orthodox Church, Buffalo, New York."

I love that word, Philoptochos!

I need a Philoptochos Committee to help me get my book done.
Posted by Mary Kunz Goldman on January 30, 2011