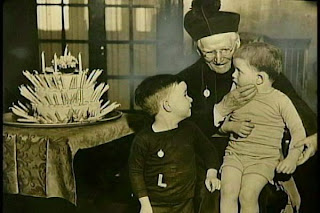 There is news on the sainthood front! It is as if we are back in the 11th century.

For one thing Pope John Paul II is now, what, beatified? He is scheduled to be canonized this spring if I understand it right. Also there is the possibility of Father Baker becoming a saint.

Father Baker's sainthood prospects are not as tied up as Pope John Paul II's, but I am especially excited about them. I like Father Baker. I admire him. I like how he became a priest when he was close to 30 and he had seen something of the world. Nothing against saints who are saints from the word go, but I identify more with someone who has to work at it a little.

I can never get over that Father Baker -- still then just plain old Nelson Baker -- was at the Battle of Gettysburg. I read somewhere he was a drummer. Imagine having those images with you your whole life, of that terrible battle. I wonder how that affected his life.

Father Baker was half German and half Irish.

Finally there is that whole orphanage business. My friends Dave and Mari visited the Father Baker museum a while ago and reported on Facebook that what would happen was, they would put these children on trains with just a tag pinned to them saying, "Father Baker's."

Imagine that! Then a nun had the job of going every day to go and get these kids at the station.

There used to be that threat involving Father Baker's. Your parents and teachers would threaten to send you there.

It went on for years. I am sure Leonard Pennario was threatened with that when he was a kid. To be honest I do not remember hearing that threat but then maybe that was because I was an angelic child AHAHAHAAA.

Howard has a friend who, his parents actually sent him to Father Baker's.

"They made good on the threat." That is what Howard said!

Oddly enough considering that whole "threat" business, all the former Baker kids seem to have enjoyed it. They have reunions which are regularly written up in The Buffalo News.

The News is vague on what miracles attributed to Father Baker are being investigated. But I remember one involving a man who was sick and he was supposed to be dead but instead he was bowling at the Knights of Columbus. They wrote about that supposed miracle a few years ago and my guess is that is the one now under the scrutiny of the Primates of the Church.

That is a very Buffalo miracle!

Godspeed Father Baker on his road to sainthood.

I must say I love the phrase "Primates of the Church". What an image that evokes in my mind!

Yourstil, I love that phrase too!!