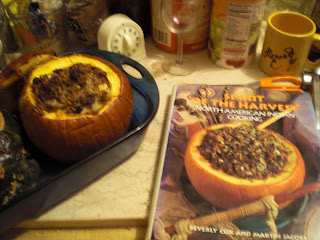 Over the weekend I was not only cooking, I was cooking with gas! And one thing I made was the stuffed pumpkin off the cover of my Native American cookbook.

Howard said it looked like an optical illusion, sitting right next to the book! I got this book just for the cover.

Was that stuffed pumpkin good!

It was easy. I could do it in between writing about Leonard Pennario.

It was also cheap! I used this 50 cent pumpkin I got from the Clinton-Bailey Market. Here is what you do: You saute up a chopped-up onion as well as a pound of ground meat until the meat is brown. I used ground turkey.

Put it in a bowl and add 1 teaspoon salt and four beaten eggs and 2 cups cooked rice. The recipe called for wild rice but I did not have that so I used brown Basmati rice.

Plus one teaspoon dried sage and a quarter-teaspoon pepper.

Cut the top of a pumpkin and scoop out the seeds and roast them. Fill the pumpkin with the stuffing. I also added raisins and a chopped-up Braeburn apple to the stuffing. You can be creative! Also the pumpkin I used was a little smaller than the one called for so I also stuffed a Buttercup squash.

Take a baking pan and put a quarter-inch of water in it. Then place the pumpkin in it. Bake it for an hour and a half at 350 degrees.

And then it is done!

Cut it into wedges and serve everyone a wedge plus some of the stuffing. I will tell you one thing, that pumpkin was good! I even ate the skin. So did Howard!