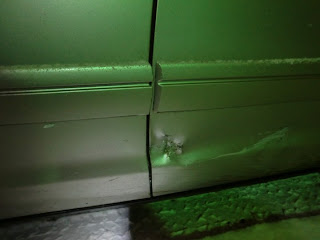 This is the driver's side door of my car after I was hit last night by a snowplow.

Notice how I toss that off so casually. Note to out-of-town Leonard Pennario fans: In Buffalo it is business as usual to be hit by a snowplow! It is nothing to write home about. Plus, you are home in Buffalo, otherwise you would not be getting hit by a snowplow.

I was hit by a snowplow when I was coming home from Zumba and sitting at the light at Kenmore and Colvin. I was on the Kenmore side. It was a Town of Kenmore snowplow.

I was sitting there listening to baritone Stephen Varcoe singing a Schubert song when, crash!

And it was funny, in Zumba class our teacher -- this was Eileen, at the Colvin gym -- had wound up the class by telling all of us to drive slowly and carefully, which I had obediently been doing. She had said that if anyone on the way home did anything stupid, just give him a friendly wave, because as long as he did not hit you, what the heck. As we were stretching she had looked at us beatifically and said, "May God bless you all."

God did bless me, because this was just a fender bender. It was not like my Facebook friend Steve Cichon who, last week a car came flying down his street in the middle of the night and took out the car in his driveway and then the porch of the house two doors down. This was nothing next to that. This was just life in Buffalo in December.

One thing that struck me later, I mean struck me after the snowplow struck me: Both the snowplow driver and the Kenmore cop who showed up to supervise the situation were both very polite and nice and good-looking men.

This would never have been the case had I been single!

Had I not been married, both of them would have looked like Cousin Ron. 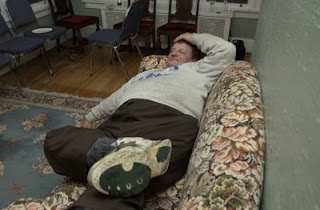 Just one of those things about life, you know?
Posted by Mary Kunz Goldman on December 14, 2010

You know, while I was following your hubs updates via FB on your plow incident last night I was thinking to myself "I can't wait to see how Mary puts Leonard Pennario into this post!" :) I just adore you!!!