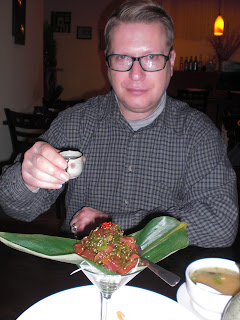 Yesterday after being married six years Howard and I celebrated by going to Orchid. Orchid (if you click the link watch out for the music) is a tiny Japanese restaurant on Elmwood in Kenmore! We had never been there before. We were not out to break the bank or have this incredible dinner to end all dinners. We just thought it would be fun to go somewhere different. Because we always used to go to Fanny's to celebrate, because we met there, but now Fanny's is gone.

It is a funny orphan feeling you get when the place where you met is not only closed but knocked down! Vaporized.

The phone call answering both questions with yes, we went.

There was the threat of an ice storm and it was Sunday night so no one else was out. Meaning we could park the Vic right outside the window. This is America! 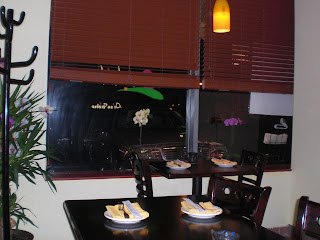 We ordered this Tuna Martini and loved it. That is it pictured at the top of this post! It is tuna served in a martini glass, glistening with red roe. I think this is the first time the word "roe" has appeared on this Web log. It will not be the last!

Howard taught me how to use chopsticks. 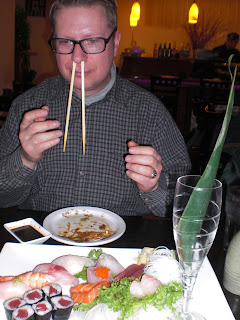 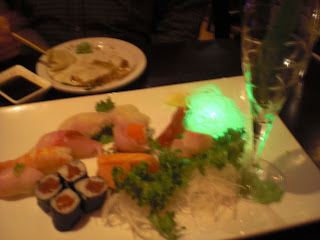 No one else was in the restaurant and there was tremendous calm. The place is very clean and bare. They played Kenny G. 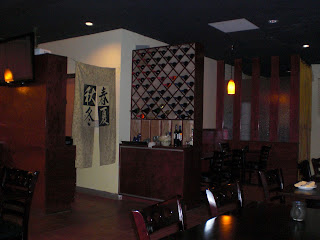 As Howard points out, it is the opposite of our home which is covered with all the stuff that your home is covered with when one of you is refurbishing a big ol' building downtown and the other one is writing a book about Leonard Pennario.

I wonder if I could go to Orchid and work. Set up a laptop.

It is nice to know it is there!
Posted by Mary Kunz Goldman on December 13, 2010

Prof., yes, it's a rare shot of Howard in civilian dress. I told him you noticed and he laughed! He said he did not want to be recognized.