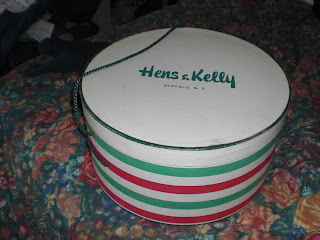 Yesterday I got into a conversation on Facebook about Buffalo's, ahem, departed department stores. We all began to wax nostalgic, a bunch of us, about Hengerer's and L.L. Berger's and AM&A's and Hens & Kelly and the rest.

Subsequently I went out to an estate sale today and bought a Hens & Kelly hat box. That is it up above! It cost $3. It would have cost $4 except someone had scrawled "Guys Hats" on it in crayon and I criticized it loudly to my mom because of that and the estate sale person overheard me and gave me a buck off.

Here is my Hens & Kelly hat box together with my prized Berger's hat box. 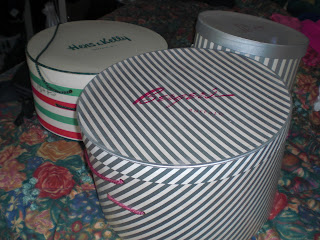 Here is another Berger's hat box only this one reads L.L. Berger. 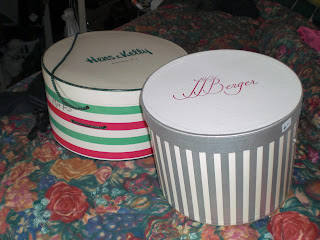 L.L. Berger is the grandest store represented in my hat box collection. Look at the link I just posted and you can see a picture of the flagship store. The local developer who bought the place and renovated it into apartments is not named in that writeup but he is our friend Carl Paladino who just ran for governor.

And there was also Hengerer's, founded by William Hengerer. The Hengerer's hat box is in the foreground of this picture. 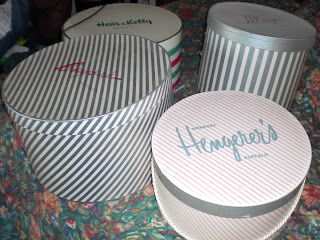 I often think about going back in time and normally I wish to go back to 1952, to Paris, and watch Leonard Pennario give the world premiere of Ravel's solo piano "La Valse."

But would it not be nice to go back still farther, to the 19th century? To see that fateful day when Mathias Hens, a Buffalo entrepreneur from Germany, went to New York on a buying trip and met the Irishman Patrick Kelly.

Wouldn't that be fun?

You would be able to say, been there, done that.

Very cool!!!! Shame you didn't have hats to go in those boxes though - you look quite lovely in a hat!

Bing, you are such a gentleman to say such nice things!! I do have hats to go in the boxes though... that's how I justify having them. Unfortunately I can't say I bought the hats at Berger's...

"Been there, done that, got the hatbox" -- Great line! I'm stealing it!