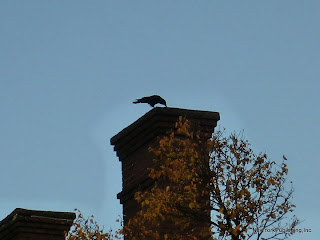 This is one of my favorite photographs ever.

It is a bird on the chimney of Big Blue!

Taken by Howard. Surely he will emerge as the Leonard Pennario of photographers.

The roof of Big Blue is so Victorian with all its chimneys. I think it has four or five chimneys. It always makes me think of "Chim Chim-inee."

I love how in "Mary Poppins" you can tell the songs were written for grown-ups.

Up, where the smoke is all billowed and curled
'Tween  pavement and stars is the chimney sweep world


Where there's hardly no day and hardly no night
There are things off in shadow and (I do not understand what comes after that).

Is he saying "cor" or "coo"? Whatever it is, it seems to be what they say in London the way here in Buffalo we say "Zut alors" and "Son of a sea cook."

Coo, look at that video!

It looks just like Big Blue!
Posted by Mary Kunz Goldman on November 04, 2010