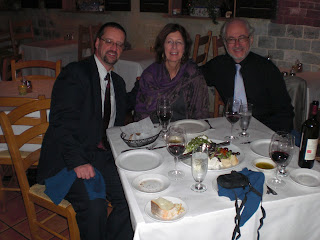 My Facebook friend Norman Lebrecht is in town! Well, he was anyway, for one brief shining day. He gave a talk about his new book, "Why Mahler?" at UB yesterday and he gave another talk after that at Denton, Cottier and Daniels, the historic, world-renowned piano store.

This morning Norman and his wife, Elbie, took off this morning from our beauteous Buffalo airport, bound for Yale where he is to deliver more lectures. All I can say is, Yale is going to hate UB after this.

Because we took him out last night and wasted him!

That is Norman in the picture above at right, with his wife, Elbie, and my friend Phil from UB. It is too bad I did not get a picture of Mr. Lebrecht in his hat. He wore a very snappy British hat. They are from London. Not only is Norman a renowned author but Elbie runs a fascinating online picture archive the pride of which is a pair of classic shots of Leonard Pennario.

We went last night to Trattoria Aroma where we ate until we could eat no more. Elbie was falling asleep with her head in her pasta. I did not fall asleep! I was too busy eating twice my weight in cheese. Meanwhile Phil kept pouring us more red wine. It was definitely a red wine evening. Well, is there any other kind?

Yes, occasionally there is a beer evening. We had that the night before at Founding Fathers, where else? We had fun with Facebook friend Norman, that is for sure.

Today he is going to be sitting there at Yale going, "Uh, what was I here to talk about?

"New Haven, Schmoo Haven! What is this stuffy place?"

Here is a picture from last night that shows me. 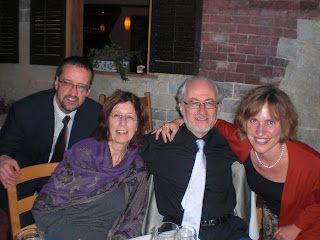 And here is one that shows Howard. This shot is from later in the evening. It is a Victorian picture which means nobody smiles. 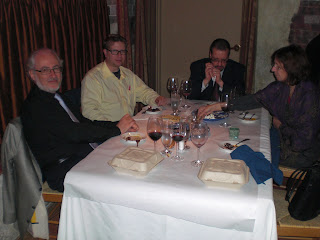 Norman's talks were beautiful. Several people came up to me and said they would never forget this evening, listening to him. One woman at Denton's told me about a concert she had been to in Europe 30 years ago and had never forgotten. She said this was like that.