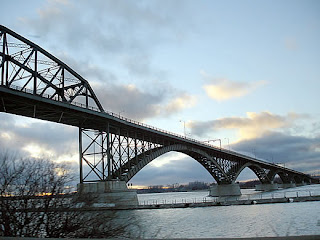 My life has become so dramatic!

Yesterday on the way in to work I was driving down the 190 South, which I think of as the Carl Paladino Expressway because he got the tolls taken away, thus permitting me to drive it. When it used to cost 50 cents each way I was too cheap. But now that it is free I drive it!  I like driving down by the river in the morning. You see crew teams rowing. You note whether the bridge is up or down. Sometimes a barge is passing by.

Yesterday morning I had passed the Peace Bridge and rounded the bend toward downtown Buffalo when I saw that a couple of cop cars had pulled a guy over. The lights were flashing.

Not only that, but the guy was bent over the car with his hands in handcuffs!

How often do you see that?

I am afraid I slowed down like a good Buffalonian to get a good look. I even turned down my car stereo! I had on Leonard Pennario playing Gottschalk. My friend Gary points out that in Buffalo we all have to slow down and pay attention when we see trouble by the side of the road. You always have to slow down to see what happened, who the person is, and if you know him. This guy, I did not know him.

But I did know someone else I saw by the side of the road!

That was a bit earlier when I had to take Howard to D&G Welding in Black Rock to pick up his truck. His truck was getting some kind of pull thing on it, so it can haul things. That is how I understand it anyway.

We were going down Hertel on that grungy stretch past the post office and we beheld a figure on the left, pushing a shopping cart. 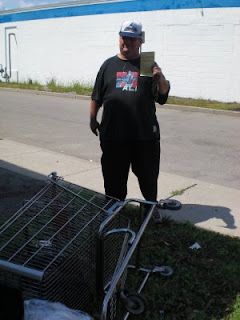 It was Howard's cousin Ron Moss.

Howard acted fast. He rolled down the window and yelled "Moss, you @W#$(*&!" Moss turned and he had his cat stance on, ready for a fight. He yelled something back.

Drama, in the morning.
Posted by Mary Kunz Goldman on November 18, 2010