Where the other half lives 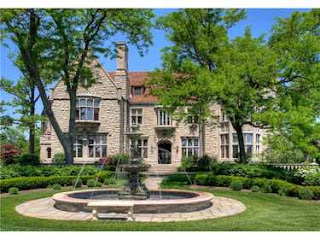 Today I was finally well so I went back to Zumba class. What a relief that was!

I also went to the estate sale at the Miller Mansion, pictured above. That is the mansion on Nottingham where Rick Snowden who used to own the Tally Ho strip club lives. The Tally Ho lost its liquor license and closed and from what I understand, Rick Snowden's marriage broke up, and now he is leaving town. So technically this was not an estate sale but a moving sale. I went with my friend Melinda.

The Miller Mansion is so grand and I kept thinking of parties I had been at there. I do not, ahem, approve of strip clubs. But it was nice of Rick Snowden and his wife entertained there and so much of the city got to enjoy that beautiful mansion.

That boring couple from Burlington, Ont., who recently bought it to have a "part-time presence" in Buffalo will not entertain like that, of that I am sure!

We took Hef's limo to Niagara Falls and drank champagne by the falls. A security guard by the falls helped us open the bottle. It was me and Jane and Lizzie and Michelle ... I think both Michelles ... and our beautiful Brazilian friend Brenda. Jane was our connection with Rick. She knew him. It was this clear cold December night at the falls. When we finished the champagne we went back to the Miller Mansion in Hugh Hefner's limo and went to a party Rick Snowden was having.

After the next party I went to I wrote Rick Snowden a note thanking him for his generosity and I felt glad today I had done that. So many notes you do not get around to writing and I am glad I wrote that one.

Here is something strange. Rick Snowden was at the door greeting us as we arrived for his estate sale. That I did not expect. It was kind of offputting. You do not imagine when you go to an estate sale that the person will be there.

"Welcome to my home," he was telling everyone.

He was selling all his presidential posters and collection of teacups commemorating British royalty. Everything was quite costly and all I can say is, it is a good thing he did not collect Leonard Pennario memorabilia because I would have spent a fortune! I wonder why he is selling his collections. I wanted to ask him but other people were around and I was not sure he remembered who I was and I felt uncomfortable so I did not ask.

I do not approve of, ahem, strip clubs, as I just said. But in spite of the strip club biz he always struck me as a good person. There are people who are strange mixes of good and objectionable. Oskar Schindler was one and I think Mel Gibson is one. Heck, I am probably one. Anyway, I like Rick Snowden.

Wherever he goes next, I wish him good luck.
Posted by Mary Kunz Goldman on September 24, 2010

There was a Zumba commercial on TV the other night and I sure thought about you. Looked like they were having a great time working out! :)