While walking into work 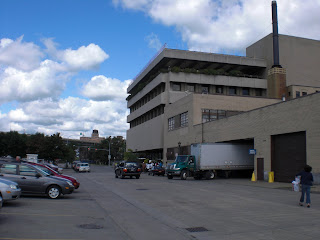 This morning arriving at the office I walked through the group of protesters at the entrance to The Buffalo News. There were maybe 40 people. I am a bad judge of numbers. And I see now that you certainly can not tell from the picture I took up above! Ahahahaha! Good thing I am not a news photographer.

Anyway, what startled me was the man at the microphone, the man giving this impassioned speech, was my friend Sam from Zumba class!

I stood agog. I met Sam to begin with when I had been taking Zumba maybe a couple of weeks. It was his birthday, and he made this announcement that he was going to celebrate by giving a rose to every lady in the class. Sam always says "lady." As in "You ladies did a great job with that song."

That day all of us ladies walked out of the gym carrying our roses and feeling proud and special. We giggled about it and I joked around about it in the Buzz column. I got to know Sam because of that and often in class we wind up Zumba-ing next to each other.

But today, all I could think was: How is this for an awkward situation?

I sort of tried to catch Sam's eye as he was making his speech. On the other hand I did not try too hard because I did not want to throw him off. All of a sudden he would stop thinking about his grievances against The Buffalo News and start thinking about Charleston step, cumbia step, hips in a circle, shake it.

Maybe he would not even place me out of context. That happens to me so I would totally understand.

This being Buffalo where we talk to strangers I had to talk to someone and I approached a gentleman on the fringe of the group of protesters. "That's my friend," I said, pointing to Sam. "I know him from Zumba class."

If you did this kind of thing in Toronto they would look at you funny and move away but this being Buffalo, the gentleman moved politely and interestedly closer to me. "Oh yeah?" he said.

"Yeah," I said. "I can't believe he is up there giving this speech."

"Where do you do Zumba?" the guy asked me.

We chatted for a couple more minutes during which time I did not manage to work Leonard Pennario into the conversation but did manage to mention that I had lost five pounds. The protest is because some people object to how The Buffalo News covered our recent downtown shootings, pointing out the victims' criminal backgrounds. While I stick with how the paper covered it, I told this protester that I felt bad that this event had divided our town.

The gentleman smiled at me and he said, "Sometimes good comes out of bad."
Posted by Mary Kunz Goldman on August 26, 2010

Wonder if they have Zumba here... Just bought a treadmill and use it everyday. BTW, just ended the 10 day cleanse and lost 10 lb.!

Ten pounds!!! Larry, congratulations! There is nothing like losing a few pounds. It brightens the whole world!